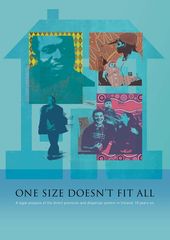 Direct provision is a scheme whereby asylum seekers and people seeking other forms of protection are provided with accommodation on a full board basis with all their basic needs apparently provided for directly. Direct provision residents receive a weekly payment of €19.10 for an adult and €9.60 for a child.

In November 1999 direct provision and dispersal was introduced as a pilot scheme to alleviate a housing shortage in the Eastern Health Board area. In April 2000 it was implemented as a national scheme and ten years later it remains in place.

FLAC has opposed the direct provision and dispersal scheme since its inception.

The training materials consist of three Powerpoint presentations which are intended to give people an understanding of the direct provision and dispersal system as well as the associated human rights instruments with a particular emphasis on the protection of economic, social and cultural rights. Government policy and opportunities for lobbying were also examined.

A pack of materials was also provided to participants which included the following documents:

FLAC hopes that others will find these resources useful and use them in their work to end the direct provision system in the longer-term but while the system remains in place, that they can use this information to improve the situation of people living in direct provision accommodation.