The Free Legal Advice Centres was started by a group of law students looking to use their legal knowledge and provide advice and information to those who could not afford the fees involved. David Byrne, Denis McCullough, Vivian Lavan and Ian Candy set up the organisation in April 1969 after attending a conference on legal aid in Trinity College Dublin.

The group's ultimate objective was to influence the national government into instituting a more comprehensive plan that afforded civil legal aid for those who needed it. In the interim, the group started to provide legal representation, advice and information to the public.

By 1974, there were sixty law students at eight centres with fifty solicitors and forty barristers all working towards the common cause, and this had increased to 12 centres in Dublin and additional centres in Galway, Bray, Limerick, and had taken three test cases (The State (Healy) vs. Donoghue, The State (Gleeson) vs. Minister for Defence and C. vs. C.).

The Pringle Committee & Report and establishment of the CCLC 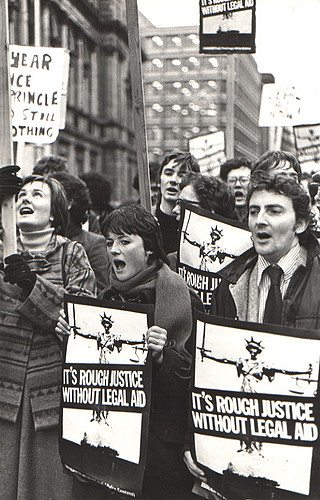 In 1974, a government committee was formed to address the issue of legal aid in Ireland. FLAC nominated solicitor Brian Gallagher to partake in what became known as the Pringle Committee, named after its chair, Mr Justice Denis Pringle. In 1977, the committee published its Report. It suggested that, in order to achieve a proper scheme for civil legal aid, centres required the work of private and paid lawyers and that individuals needed to be educated about their rights. It was to take a further three years and a case to the ECHR, Airey vs. Ireland, before the state would establish the Legal Aid Board in response to this Report.

In 1975, FLAC achieved one of its early ambitions by opening the first community law centre in Ireland. On 1 April, Coolock CLC began its work, with a solicitor and a secretary. For more information on Community Law and Mediation Northside, as it is now known, please see the CLM Northside website.

No funding: The threat of closure

In early 1980, FLAC was forced to close the majority of its centres due to lack of funding; three centres in Cork, however, remained open. By changing its focus to welfare rights, FLAC was able to continue doing work in communities in that legal area. By the mid-1980s, FLAC was able to regain funding and begin to build on its work again.

The publishing of The Closed Door: A Report on Civil Legal Aid Services in Ireland in 1987, in collaboration with CLM Northside, voiced FLAC's opinions on the confines brought by the State Scheme of Civil Legal Aid and Advice, produced in the 1970s and establishing that legal centres could only provide aid to specific types of law, but did not address the possibility of new reform. In 1980, when the Legal Aid Board was finally established and the first Law Centre opened, FLAC protested a number of shortcomings and under-funding.

A state scheme of Civil Legal Aid at last?

However FLAC continued to highlight gaps in provision such that the campaign for an adequate system of civil legal aid supported by reformed legislation continues to the present day - please see our current legal aid campaign for more information. In particular, FLAC has produced a report in 2005, entitled Access to Justice -A Right or a Privilege?, which examines the current system of civil legal aid and suggests a blueprint for action.

Over time FLAC has become involved in a wide range of social issues, with a particular focus on social welfare, but also on credit and debt law, immigration law and equality. Again you can read more about FLAC's work on these issue in our campaigns and news sections.

There are now 66 FLAC legal advice clinics around Ireland, mainly based in and facilitated by the Citizens Information Services and with the commitment of almost 600 volunteer lawyers. It has established specialist language centres such as our clinic which offers Irish Sign Language Interpretation and our clinic in Conradh na Gaeilge as well as centres dealing with specialised topics such as Immigration Law, Employment Law and Family Law - for more details, check out our Legal Advice Clinics page.

As our mission statement says, FLAC's aim is to realise equal access to justice for all. The organisation will continue to campaign on all the issues above and work through advocacy, casework and analysis of legal and social issues to eradicate social and economic exclusion in Irish society.