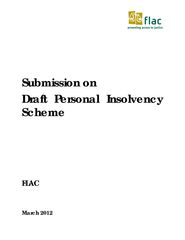 Having become increasingly dependent on credit to organise their finances over the past fifteen years, Irish consumers are now facing a massive debt problem ata time of rising unemployment.Irish laws have not evolved to meet the rapidly changing landscape. The legal system itself has the same basic procedures since before the beginning of World War II. So we have a 21st century consumer credit market with a 19th century debt enforcement system.

FLAC is working to ensure that these laws are reformed, in order to provide consumers and their dependants with a dignified and effective way of dealing with debt that will be fair to the consumer, the creditor and the taxpayer alike. Comprehensive state-funded systems of money advice and civil legal aid are essential to ensure consumers have the support they need to address their situation.

You will find policy papers on debt in the publications section.There are also many related press releases around our credit and debt campaign.Finally, FLAC's in-house magazine, FLAC News, always features opinion pieces and articles on our debt campaign.

On 19 April 2012, FLAC held a conference on Legislating for personal insolvency in Ireland: International developments and domestic issues. You can download presentations from the following speakers (in powerpoint or word format), but note that we will have video clips of the event available shortly:

Other resources we have available are:

Please contact us at campaigns@flac.ie if you feel you have been affected by the issues mentioned above.