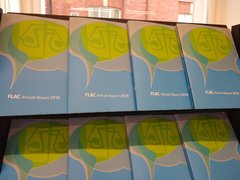 A total of 25,164 people received basic legal information or advice from FLAC’s telephone information and referral line and from volunteer lawyers at legal advice clinics. These figures were announced in FLAC’s 2018 Annual Report, launched today by Minister for Justice and Equality, Charlie Flanagan TD.

Speaking ahead of the launch, Minister Flanagan said

“FLAC is such an important organisation, which helps so many people, and I am very pleased to be launching its Annual Report for 2018 as it marks its 50th year in existence.”

FLAC as an independent Law Centre continues to take on cases in the public interest, cases, which may have an impact beyond the individual. In 2018, FLAC had 108 casefiles, the most prevalent issues were housing/landlord and tenant (30 %), discrimination (22.4%) and social welfare (18.7%).

Discrimination in the provision of services

Issues arising from the casework

Eilis Barry, FLAC Chief Executive highlighted a number of key issues of concern which arose from the casefiles;

“Through 2018 we advocated for a root and branch review of the 40 year old scheme of legal aid and advice to include the delays, the means test, the accommodation and child care allowances, the legal aid fees, and the areas of law covered. The Chief Justice Frank Clarke recently reiterated his call for a broader and deeper legal aid scheme and has set out the economic and moral arguments to support such an investment. The Legal Aid Board is a fundamental part of the administration of justice and the rule of law, and needs a major investment of resources to deal with all kinds of cases where the greatest need is including housing and discrimination claims.

We welcome the very recent enactment of the Land and Conveyancing Law Reform Act 2019 which gives greater powers to the Circuit Court to refuse to grant a possession order.  This Act introduces a defence for potentially thousands of people in long-term arrears and a significant percentage of these people are likely to be entitled to legal aid.

We are concerned however that the Legal Aid Board Aid simply does not have the resources to deal with the significant increase in demand which it will now face. The Abhaile scheme cannot provide legal representation for these people. The Legal Aid Board will require a significant immediate increase in its funding simply to deal with the new demand on its already overstretched resources. The welcome provisions of this new Act will only be effective if they can be enforced. It is vital that there is a legal aid audit when any new legislation is passed. “

FLAC’s information line regularly receives calls from lay litigants who are representing themselves in complex court cases and who are desperately in need of assistance, advice and representation, which FLAC does not have the resources to provide.

FLAC recommends all court forms and procedures should be accessible, precise, clear and reader-friendly in plain English FLAC also advocated for the courts to be more user friendly in particular for lay people and people with disabilities. We believe there should be guides on matters such as the listing system, call overs, hearing dates, and a “nutshell” guide for lay litigants on how to represent yourself in court.

“I am very pleased that my department was in the position, in 2018, to provide €40,000 in funding for FLAC’s Roma Clinic initiative, in addition to the €98,000 department funding towards the ongoing information, advice and advocacy work carried out by FLAC. I would also like acknowledge the crucial financial support provided by other bodies including the Law Society, Bar Council, legal practitioners and philanthropic donors that has allowed over 25,000 people receive assistance from FLAC in 2018.”

Notes to the editor

1. FLAC (Free Legal Advice Centres – www.flac.ie) is an independent legal and human rights organisation which exists to promote equal access to justice. As an NGO, FLAC relies on a combination of statutory funding, contributions from the legal professions and donations from individuals and grant-making foundations to support its work.

What were the calls about?

What were the queries about?

You will only qualify for legal aid if you have an income of less than €18,000. In assessing your means you are only allowed an allowance of €8,000 per year for accommodation costs and up to €6,000 per annum for Childcare expenses. Legal aid is not free Even where a person is on an income of less than €18,000, they must make a financial contribution. The minimum contribution for legal aid is €130 which is significant if you are on the reduced rate of social welfare paid to under 26s. Persons may be required to make contributions in the region of thousands of euros that may be akin to some private practitioner fees.

6. The Land and Conveyancing Law Reform (Amendment) Act 2019 was commenced on August 1st 2019 (by SI 397/2019) and has major implications in repossession cases concerning mortgage arrears on the borrower’s PPR (Principal Private Residence) in that it obliges the Circuit Court to consider six specific stated criteria when deciding whether to grant or to refuse to grant Possession Orders.

It amends the Land and Conveyancing Law Reform 2013 Act by inserting a Section 2A after the existing S.2 of the 2013 Act. S.2 of the 2013 Act is the provision that allows the Circuit Court to adjourn a Principal Private Residence (PPR) repossession case to allow the defendant borrower to consult with a Personal Insolvency Practitioner (PIP) with a view to proposing a Personal Insolvency Arrangement (PIA).

Section 2A (1) applies to repossession cases relating to land which is the principal private residence (PPR)[1] of the borrower and where one of the following conditions are met:

·        the case was adjourned for the borrower to consult a PIP but where a PIA did materialise;

·        where such an adjournment was sought but was refused by the court;

The six designated matters in S.2A (3) which the Court shall take account of are:

1.      whether the making of the order would be ‘proportionate’ in all the circumstances (broken down into further criteria in s. 2A (4))

2.      the circumstances of the borrower and dependants living in the PPR

3.      whether the lender has made a statement to the borrower of the terms it would be prepared to settle the matter in a way that would enable the defendant and dependants to remain in their home

4.      the details of any proposal made (before or after the issue of the proceedings) by or on behalf of the borrower to remain in the PPR, including in a designated scheme, or to secure alternative accommodation

5.      the response of the lender to any proposal made by the borrower

6.      the conduct of the parties in any attempt to find a resolution to the mortgage arrears problem