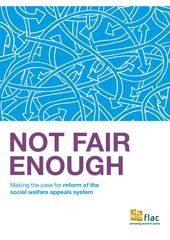 NOT FAIR ENOUGH sets out the operation of the Social Welfare Appeals Office and charts the increase in the workload of the office as well as looking at the challenges facing it in terms of limited resources and delays. The report also summarises some of the main difficulties facing appellants and their advocates when they come into contact with the appeals system. These include the perceived lack of independence of the Appeals Office as a section of the Department of Social Protection, as well as the need for greater transparency, consistency and even-handedness. FLAC examines the process in light of domestic and international human rights law to which the State is committed even in times of austerity. The report outlines various perspectives on the appeals system, from advocates representing clients at appeal stage to the views of the Chief Appeals Officer on behalf of the Appeals Office. FLAC makes the case for reform of this key institution which plays an ever more critical role as more and more people seek state support in a fair and timely manner.