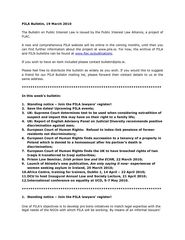 2.Save the dates! Upcoming PILA events;

3.UK: Supreme Court determines test to be used when considering extradition of suspect and impact this may have on their right to a family life;

6.European Court of Human Rights finds succession to a tenancy of a property in Poland which is denied to a homosexual after his partner’s death is discrimination;

7.European Court of Human Rights finds the UK to have breached rights of two Iraqis it transferred to Iraqi authorities;

9.Launch of Akiwda’s new publication, Am only saying it now- experiences of women seeking asylum in Ireland, 25 March 2010;