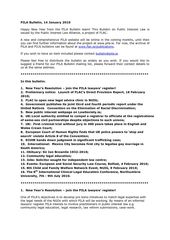 4. Government publishes its joint third and fourth periodic report under the United Nations Convention on the Elimination of Racial Discrimination;

6. UK: Local authority entitled to compel a registrar to officiate at the registrations of same-sex civil partnerships despite her objections to such unions;

8. European Court of Human Rights finds that UK police powers to ‘stop and search’ violate Article 8 of the Convention;