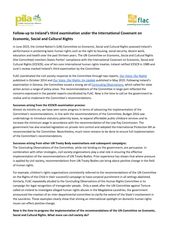 FLAC coordinated the civil society response to the Committee through two reports, Our Voice, Our Rights published in October 2014 and Our Voice, Our Rights: An Update published in May 2015. Following Ireland’s examination in Geneva, the Committee issued a strong set of Concluding Observations, which called for state action across a range of policy areas. The recommendations of the Committee in large part reflected the concerns expressed in the parallel reports coordinated by FLAC. Now is the time to call on the government to realise and to implement the Committee’s recommendations.