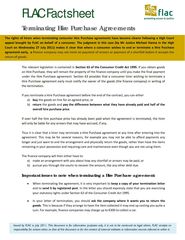 A High Court appeal brought by FLAC on behalf of a consumer has clarified the rights of hirers when terminating consumer Hire Purchase agreements. The judgment in this case, by Mr Justice Michael Hanna in the High Court on Wednesday 27 July 2011, establishes that where a consumer wishes to end or terminate a Hire Purchase agreement early, finance companies are not allowed to insist on payment of arrears or payment of a shortfall before they accept the return of goods.

You can also download the judgment in full and also read FLAC's press release on the case. Also note there is an update to the hire purchase situation from May 2014 in the O'Brien case which you can also read.

Facts of the Gabriel case

This case concerned the interpretation of Section 63 of the Consumer Credit Act 1995 which deals with the early termination of such agreements. This section provides that a consumer hirer wishing to terminate a Hire Purchase agreement early must notify the owner of the goods (the finance company) in writing of the termination. The hirer then has the option to either buy the goods outright for an agreed sum, or return the goods and pay the difference between what has already been paid and half the Hire Purchase price. If over half the Hire Purchase price has already been paid when the agreement is terminated, the hirer will only be liable for any arrears that may have accrued, if any. Finally, the hirer may also be potentially liable for any failure to take reasonable care of the goods.

In this particular case, the hirer had obtained finance for a car on hire purchase from GE Money in 2008, but needed to end the agreement in 2009 when she ran into financial difficulty. Working with the support of her local Money Advice and Budgeting Service, she gave GE Money written notification of her intention to terminate the agreement and tried to return the car. However, the company refused to accept the car back until one-half of the total Hire Purchase price had been paid, arguing that Section 63 meant that the compensation must be paid up front as a pre-condition for ending the agreement. The hirer then made a complaint to the Financial Services Ombudsman (FSO), who agreed with GE Money that the shortfall should be paid before the car could be returned.

In the High Court, following an appeal from the decision of the FSO, Justice Hanna found that there was no legal basis for GE Money to insist upon this pre-condition prior to the return of the vehicle and held that the FSO had made a "significant error" in insisting that the compensation be paid up front. He noted that although the finance company was entitled to have all liabilities met by the hirer, it was not entitled to insert a pre-condition of a minimum repayment amount after the termination of the Hire Purchase agreement:

"To insert the precondition of discharge of liabilities, would, in my view, amount to an effective amendment to the legislation, something which neither the respondent nor this Court is entitled to do. If it was the intention of the Oireachtas to render termination of a Hire Purchase agreement contingent upon discharge of liabilities it would have said so."

Paul Joyce, FLAC Senior Policy Researcher and advisor on consumer credit matters, welcomed the clarity provided by this decision. He commented that the vast majority of hirers bring HP agreements to an end because of financial difficulty and thus would not be able to pay compensation in one lump sum. FLAC hoped the judgment would end the situation where finance companies refuse to accept vehicles back despite agreements being validly terminated, and where the hirer, already under severe financial pressure, was burdened with care of a vehicle which he or she does not own no longer uses.