Direct Discrimination? An analysis of the system of Direct Provision in Ireland (2003) 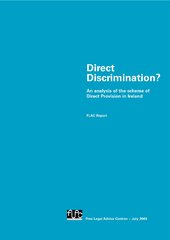 This report takes an in-depth look at the government's policy of Direct Provision for asylum seekers and challenges its raison d'être. Published in July 2003, the book documents FLAC's concerns about the legal basis for the introduction of DP and analyses the problems which have arisen from it.
Points covered in the book include the following: