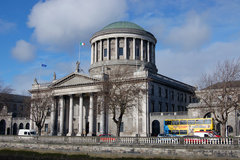 EPIC and a number of other parties have been permitted to join the case as amici curiae, or “friends of the court”. Such amici can provide expertise and perspectives to assist the court in its deliberations. The US government is also appearing as an amicus in the case.

EPIC is providing expert evidence on whether personal data transferred by Facebook Ireland to Facebook US receives adequate legal protection. As an amicus curiae, EPIC can provide the High Court with a comprehensive assessment of the strengths and weaknesses of the US legal system as to how it protects the personal data of people resident in the EU, including Ireland, a perspective that might not otherwise be available to the court.

In today’s submission, counsel for EPIC focused on concerns around:

It discussed a variety of mechanisms used by the US Government to access personal data transferred to the US, including Executive Orders.

EPIC addressed the inadequacy of privacy safeguards for EU citizens, stating that US privacy protections are limited in scope; that personal data and communications of non-U.S. persons are excluded from important U.S privacy safeguards; and that many privacy rules are subject to Executive Branch modification or repeal.

It also examined the lack of effective redress for EU citizens. EPIC says that US law does not provide EU citizens with effective redress for violations of their Charter rights arising from authorized surveillance. It believes remedies that permit challenges to unauthorized surveillance are effectively untenable, and that EU Citizens’ Data Protection rights of access and correction are strictly limited under the Judicial Redress Act and are subject to discretionary policies that are revocable by the Executive. Finally, EPIC said overarching barriers to redress are likely to preclude EU citizens’ legal claims involving US surveillance.

This is one of the first times an NGO such as EPIC has been granted leave to appear as an amicus curiae in an Irish court. EPIC’s legal counsel Alan Butler has travelled from the US to Ireland for the case.

FLAC provides representation in cases that have strategic value and that may effect positive social change, whether to vindicate human rights or to improve access to justice in Ireland.

Standard contractual clauses have been approved by various European Commission decisions. They were designed to allow businesses to transfer the personal data of EU citizens to countries outside the European Economic Area while ensuring the citizens enjoyed equivalent privacy rights to those they have in the EU.

The case follows a landmark decision invalidating an international arrangement for transferring data in light of the U.S. surveillance regime. In the challenge by privacy advocate Max Schrems, the Court of Justice of the European Union found insufficient legal protections for the transfer of European data to the United States