Permitting pre-clearance to operate in Ireland may violate Human Rights 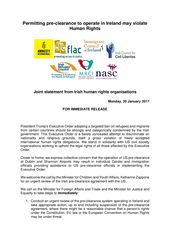 Cover image for Joint Statement on US immigration pre-clearance

President Trump’s Executive Order adopting a targeted ban on refugees and migrants from certain countries should be strongly and categorically condemned by the Irish government. This Executive Order is a barely concealed attempt to discriminate on nationality and religious grounds, itself a gross violation of freely accepted international human rights obligations. We stand in solidarity with US civil society organisations working to uphold the legal rights of all those affected by this Executive Order.

Closer to home, we express collective concern that the operation of US pre-clearance at Dublin and Shannon Airports may result in individual Gardaí and immigration officials providing assistance to US pre-clearance officials in implementing the Executive Order.

We welcome the call by the Minister for Children and Youth Affairs, Katherine Zappone for an urgent review of the Irish pre-clearance agreement with the US.