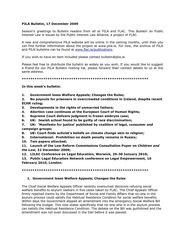 2. No payouts for prisoners in overcrowded conditions in Ireland, despite recent ECHR ruling;

3. Developments in the rights of unmarried fathers;

4. Abortion case continues at the European Court of Human Rights;

6. UK: Jewish school found to be guilty of race discrimination;

7. UK: ‘Manifesto for justice’ published by coalition of legal, consumer and campaign groups;

11. Launch of the Law Reform Commissions Consultation Paper on Children and the Law, 22 December 2009;