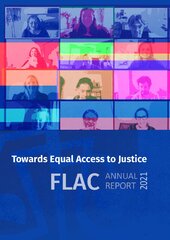 The Chief Justice of Ireland, Mr Justice Donal O’Donnell will launch the FLAC Annual Report 2021, “Towards Equal Access to Justice”, at 9:00am on Monday, 27 June 2022.

FLAC, the independent legal, equality and human rights organisation, works in numerous ways to promote the right of access to justice. Key highlights from 2021 include:

Speaking in advance of the launch, the Chief Justice commented:

“FLAC has established itself as an institution, and an invaluable one, which over the course of its history has campaigned for change, protected the weak, challenged the strong and educated us all.”

Throughout 2021, the combined ongoing impact of the pandemic and increased financial pressure on individuals and households added to what CE of FLAC Eilis Barry is describing as ‘an ongoing crisis of unmet legal need in this country’.

FLAC’s Telephone Line provides an insight into the enormous stress some individuals and families were under in 2021. Almost 30% of all queries related to family law matters such as divorce, separation, domestic violence and custody and maintenance issues.

‘We are hearing from individuals and families who are under enormous pressure in the areas of employment and family law. We could hear people were already stressed by the time they managed to get through to the phone line. Many of their queries were complex and took longer to provide the information they needed.

Callers were stressed because they didn’t qualify for legal aid, many narrowly missing the means test. In one particular case, a caller was over the legal aid means test by €500 and had incurred legal costs in a contested family law matter of in excess of €20,000.

Many callers try to navigate the Courts System alone. FLAC have nowhere to refer these ‘lay litigants’ who are desperately trying to who are completely daunted by Court forms and procedures.

We also heard from callers contacting FLAC in situations where they had been served with legal proceedings but were facing many months of delay in being approved for legal aid.

Employment law queries were the second highest area of queries in 2021. FLAC also noted a steady increase in queries relating to housing matters which were up over 9% on compared to 2020.

It is a matter of concern that we may have nowhere to refer callers looking for advice or representation in employment law cases. There is currently no legal aid for employment and discrimination claims before the workplace relations commission. – Eilis Barry

It is important to note that these figures are just the tip of the iceberg as FLAC cannot answer every call made to our phoneline. We are concerned that significantly more people are trying to get through and are unable to, despite our increasing staff and resources on the phone line. There has to be a better way to provide services that enable access to justice.

What is clear is the acute need for the frontloading of accessible early legal information, advice, advocacy. We are relieved and pleased that the government has established a long overdue review of the civil legal aid system. What is needed now is a radical reimagining of how the various aspects of access to justice are delivered from legal information, legal advice, and advocacy to how legal representation is delivered, especially to individuals and communities experiencing poverty, disadvantage and exclusion.

In addition to the Telephone line, FLAC’s Phone Advice Clinics, were extremely busy with more complex and difficult queries. 2,729 consultations were held during 2021. 35.6% had a family law query and 30% had an employment law query.

Litigation in the Public Interest

FLAC as an independent Law Centre takes on cases in the public interest and opened 30 new case files in 2021. It mainly represents people experiencing poverty, disadvantage and exclusion. Housing, Social Welfare and Discrimination matters remain the most prevalent areas of law.

Casework highlights during 2021 include:

Research published just last week by the University of Limerick on “Irish Travellers' Access to Justice” documents institutional racism against Travellers in the criminal justice system. FLAC’s casework provides an insight into the extent of the discrimination experienced by Travellers, and other groups such as Roma, in their engagement with State bodies and public services more generally, particularly in the context of housing and accommodation.

‘Litigation undertaken by FLAC continues to illustrate the ongoing specific and acute legal needs of people and marginalised communities living in poverty and disadvantage, especially in areas like access to accommodation, discrimination and social welfare. Even access to tribunals such as the WRC (which deals with discrimination cases in the first instance) and which is supposed to be accessible for people without representation is impossible for many without access to legal advice and representation.

The harsh reality is that FLAC cannot provide representation beyond a very limited number of cases. However, services such as the Traveller Legal Service provide a model for how the right of access to justice of such communities may be vindicated through the provision of dedicated legal services with the involvement of the community.’

The Need for Change

FLAC uses the experience of its services and casework to inform policy recommendations and analysis. 2021 highlights include:

According to Paul Joyce, Senior Policy Analyst with FLAC,

‘The negative financial impact of Covid, the rising cost of living and the housing crisis really do create the perfect storm where financial difficulties become more long-term then short-term and where those marginalised and in more precarious employment are more likely to face persistent over-indebtedness with all the stress that entails.’

Embargoed copy of the FLAC 2021 Annual Report will be available to download at www.flac.ie on Monday morning at https://www.flac.ie/publications/flac-annual-report-2021/

FLAC (Free Legal Advice Centres) is an independent legal, equality and human rights organisation, which exists to promote equal access to justice. As an NGO, FLAC relies on a combination of statutory funding, contributions from the legal professions and donations from individuals and grant-making foundations to support its work.

What does FLAC do?

FLAC and IHREC launched Equality ACTion in November 2021, a joint project aiming to strengthen the engagement of civil society with the review of the equality legislation, Equality ACTion held a series of events and roundtables aimed at Civil Society Organisations that planned to engage with the Review of the Equality Acts. The project also published accessible Briefing Notes relating to the Review, the consultation process, and the Equality Acts.