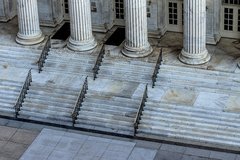 FLAC welcomes the landmark judgement of the Supreme Court delivered today in a case concerning an application under the Planning Acts for the removal of an extended Traveller family by a local authority from lands owned by the local authority where they are residing.

The case entitled Clare County Council v McDonagh was commenced in the High Court under section 160 of the Planning and Development Act 2000. The High Court granted an interlocutory Order on a summary basis - requiring the Traveller families to leave the lands in question before the full hearing of the merits of the case - and this Order was approved by the Court of Appeal. The Supreme Court has now rejected this approach as flawed and has remitted the case back to the High Court for a full hearing.

In the Supreme Court, Mr Justice Hogan considered the constitutional protection afforded to the home and also under Article 8 of the European Convention on Human Rights. While he accepted that the Traveller families concerned were trespassers on the land and also that the placing of their caravans was in breach of planning law, he did not consider that this justified a Court granting an injunction requiring the removal of the caravans before the proportionality of the making of such an Order was considered in full.

“Through its Traveller Legal Service, FLAC has been raising concerns about the fairness of the summary eviction of homeless Traveller families over several years, including through its case work. The decision in Clare County Council v McDonagh, finally clarifies that the protection of the dwelling under the Constitution does extend to Travellers living on unauthorised sites and that the Courts must also have regard, where appropriate, to the case law of the European Court of Human Rights. The recognition of Travellers as a vulnerable minority by the Court is also hugely significant as it places a particular duty on the Courts to take into account their circumstances when faced with an application to have them effectively evicted from an unauthorised site.

As Mr Justice Hogan stated ‘the legal system has not found it altogether easy to accommodate the distinct cultural traditions of the travelling community – such as nomadism and living in large family groups – within its traditional ambit of protecting and enforcing property rights, enforcing laws restraining trespass and legislation designed to give effect to legitimate planning, zoning and environmental concerns’. This judgment finally grapples with some of this difficulty and seeks to provide some balance, such that the particular disadvantage experienced by many Travellers, particularly arising from the reluctance of local authorities to deliver Traveller specific accommodation, is at least acknowledged and weighed in the balance by the legal system, including the Courts.

“This is a very significant judgment that should see Travellers granted the procedural protections consistent with their rights under the Constitution and the European Convention on Human Rights. All too often Travellers are evicted from sites by local authorities whose responsibility it is to house them, without any alternative accommodation being offered, and without any assessment by a court of the impact of the eviction on the Travellers’ rights. In our view, this should prompt the Government to reconsider the other legislative mechanisms used to evict Travellers which have no requirement for the proportionality of an eviction order to be considered by a Court and which barely contain any procedural safeguards at all.”

In its submission to and appearance before the Joint Committee on Key Issues Affecting the Traveller Community, FLAC highlighted that the majority of legislative mechanisms used to evict Travellers allow for summary evictions without judicial oversight. FLAC recommended that the Government bring forward reforming legislation that ensures that, other than in the most exceptional of circumstances, a family home can never be interfered with in the absence of a merits based determination involving a proportionality assessment by a Court accompanied with a requirement to offer alternative appropriate accommodation to homeless families.

“The McDonagh judgment makes clear the importance of access to justice for Travellers. The McDonaghs were able to avail of an ad hoc scheme to receive legal representation before the Supreme Court, without which they would not have had their rights vindicated. It is imperative that as part of the Government’s current review of civil legal aid, access to legal aid is broadened to encompass situations like this.”

FLAC (Free Legal Advice Centres) is an Irish human rights organisation, which exists to promote equal access to justice. In July 2020, FLAC launched its dedicated Traveller Legal Service. Supported by The Community Foundation for Ireland and in cooperation with a Steering Group made up of representation from the national Traveller organisations, the aims of the Service are to empower Travellers and Traveller groups to engage with the law as a means of combating discrimination and advancing the rights of Travellers in Irish Society. The TLS comprises a full-time solicitor, Christopher McCann for three years. Referrals to the Service come through national and local Traveller organisations.

In considering the previous case law of the Courts concerning planning injunctions, Mr Justice Hogan identified a number of factors that distinguished the present case from the previous decisions of the courts, including the fact that Travellers are a vulnerable and marginalised minority; that the particular family in the case appeared to have nowhere else they could move to lawfully; that the planning authority is also the housing authority and that it was at least arguable that the local authority was in breach of its statutory duty in failing to provide the family with Traveller specific accommodation suitable to their needs and addressing the medical needs within the family. He further took into account that there was no evidence that the rights of any other third party were prejudicially effected as the land in question, being owned by the local authority, did not have any apparent amenity use at the time in question.

This decision does not mean that the High Court may not ultimately grant the application for a planning injunction to the local authority in question. However, it does mean that the Courts will from now on be compelled to consider the constitutional and Convention principles that apply, as identified by the Supreme Court, when determining whether an eviction of a homeless Traveller family from the roadside is justified, particularly where occupation of an unauthorised site arises from the failure of a local authority to meet its statutory duty to provide them with appropriate accommodation.

In 2021, FLAC made a detailed submission to the Joint Oireachtas Committee on Key Issues Affecting the Traveller Community on the subject of access to housing and accommodation, including Traveller-specific accommodation, and appeared before that Committee in July 2021.

FLAC’s opening statement to the committee is available at: https://www.flac.ie/publications/opening-statement-to-joint-committee-on-key-issues/