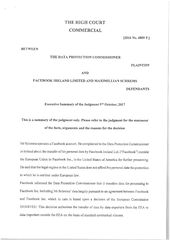 Sir, – We in the Free Legal Advice Centres (Flac) note the decision in the case involving the Data Protection Commissioner, Facebook and Max Schrems (“High Court asks ECJ to examine Facebook case”, October 3rd). As Ms Justice Caroline Costello points out, the case raises issues of fundamental concern to millions of people within the European Union and beyond.

There is an important background to that case. In 2016 the High Court decided to allow Electronic Privacy Information Centre (Epic), a Washington based NGO, to act as a “friend of the court” (amicus curiae) in this case, on the grounds that it would be in a position to offer a counterbalancing perspective from the US government and bring to bear an expertise which might not be otherwise available to the court. The US, Digital Europe and BSA Business Software Alliance were also allowed to appear as amici.

We in Flac have long promoted the wider use of the amicus curiae mechanism in the courts, particularly for civil society organisations that have significant expertise gained from front-line work.

The use of this mechanism can provide the courts with a plurality of legal views and a more democratic approach to cases that involve the broader public interest.

Flac decided to represent Epic in this case as it involves fundamental rights of privacy.

As a small NGO with limited funding, which seeks to act as a counter-balance to large business and state interests, Epic needs pro bono representation in order to be able to participate, and we in Flac, as one of the few independent law centres in Ireland, are pleased to support a peer NGO seeking to uphold fundamental rights. – Yours, etc,