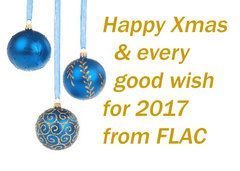 Our telephone information & referral line will reopen on Tuesday 3 January at 9am.

FLAC legal advice clinics will not operate during the holidays. Clinics for the start of January are as follows (see centres pages for exact details of times, location maps and contact numbers):