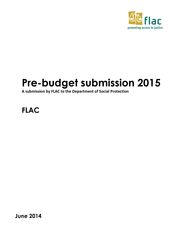 Access to justice campaign group FLAC is today calling on the state to produce a budget that people can tolerate by applying basic human rights standards in how it decides to allocate spending.

Presenting its pre-budget submission to the Joint Oireachtas Committee on Finance, Public Expenditure & Reform today, FLAC is arguing that using a human rights budgeting approach would result in a process that is proportionate, transparent and fair for people in Ireland.

The organisation’s submission focuses on how best to protect vulnerable groups in particular by ensuring the state adheres to basic standards set down in international law.FLAC is proposing to the Committee that meeting these equality and human rights standards would mean the government commits to ensuring that no-one ever falls below the minimum core income and supports which are required to live life in dignity.

In particular, FLAC suggests that such standards would form a process for identifying the impact of any proposed cuts on affected groups before the decisions are set in stone and which includes dialogue with those most likely to be affected.

“If those most heavily affected by the recession could at least see that our government demonstrably tried its best, using objective standards, to ensure that its budget decisions were fair and proportionate, it might make those decisions easier to bear,” commented FLAC Advocacy & Policy Officer Yvonne O’Sullivan, who is presenting the submission at Leinster House this afternoon.

FLAC recently launched its annual report for 2013 that shows the legal rights group directly helped some 27,546 people around the country with legal queries in 2013. It is currently coordinating a Shadow Report ahead of the Irish state’s country examination next year under the International Covenant on Economic, Social and Cultural Rights.