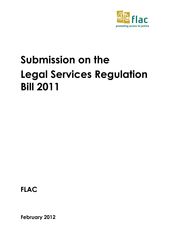 Government proposals to change how legal services are delivered in Ireland do not prioritise access to the legal system and thus will not improve the situation for many people, said legal rights organisation FLAC today.

" FLAC does not see the Bill increasing access to legal services for non-commercial bodies. It does not reduce legal costs and in fact leaves untouched areas which are hugely problematic and which cost people untold time and money, such as the overloaded courts and the underfunded civil legal aid system," said FLAC Director General Noeline Blackwell.

The organisation had earlier issued its submission in response to the Legal Services Regulation Bill 2011, which contains government proposals to reform legal services delivery, including how costs are calculated, how the profession is controlled and how people can become lawyers.

"FLAC regularly hears from people who are unhappy in their dealings with lawyers or who cannot access legal services generally. We see this Bill as an opportunity to introduce comprehensive best practice principles based on international standards for legal practitioners but also to really develop access to legal services for people in Ireland," said Ms Blackwell.

"There are sensible things the government could and should do, such as include all stakeholders in its drive to reform the sector. As part of tackling costs, it should first investigate thoroughly why services are as expensive as they are. It could bring in procedures that will both keep costs down and champion the public interest, such as protective costs orders and multi-party actions," said Ms Blackwell. "But most of all, the government must be really sure that any measures it takes will actually improve how people access law, as opposed to implementing change for the sake of it," she concluded.

FLAC's submission contains 17 recommendations on the Bill. It includes such proposals as