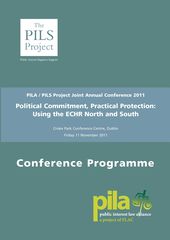 Changes to the UK's human rights regime proposed by the coalition government are a negative step and would undermine the practical successes of the 1998 Human Rights Act, the Director of a leading UK rights pressure group told almost 400 attendees at a conference on public interest law in Dublin today.

The European Convention on Human Rights is currently enshrined in both Irish and UK law and has been used to protect the rights of marginalised and disadvantaged people. However the UK government is now backing changes to the Human Rights Act which Shami Chakrabarti of UK rights group Liberty says "will make fundamental rights and freedoms more contingent on citizenship, good behaviour or other palatable status."

Given the guarantees provided by the Good Friday Agreement around equivalent human rights protections in the North and South, activists argue that in the current political climate it is more important than ever to maintain a cross-border commitment to equivalent protection.

"Crude and ignorant attacks on the Human Rights Act in the UK should be troubling to friends of freedom further afield. How bizarre to talk up universal human rights abroad whilst seeking to dilute and diminish them at home. Fundamental rights and freedoms cannot be contingent on any particular patriot status," said Ms Chakrabarti.

PILA Manager Larry Donnelly said that the huge attendance at the conference in Croke Park exemplified the force for change marshalled by legal practitioners, independent organisations, universities and campaigners using law in the public interest.

"PILA sees at first hand the breadth of excellent pro bono work that lawyers are doing to meet the ongoing, unmet legal needs of community and voluntary organisations. These bodies are working on the coalface with vulnerable groups and individuals to address Irish society's most profound problems. We've also discovered great expertise and enthusiasm from legal academics and law students for advancing the use of law in the public interest", according to Mr Donnelly.

Delegates were struck by the importance of safeguarding human rights protections across borders as highlighted in the conference. "In this ever-shrinking world we must all choose between being humans everywhere or foreigners almost everywhere," concluded Ms Chakrabarti.