Ireland commited to human rights, but not on all issues 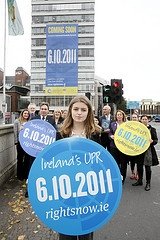 Writer and campaigner Orla Tinsley joins rights activists to launch the "Your Rights Right Now" campaign's 25m-high banner, on Dublin's Liberty Hall on 22 September to mark the countdown to Ireland's first ever full hearing on its human rights record under the UN's Universal Periodic Review in Geneva on 6 October 2011. Photo by James Horan/Collins.

FLAC welcomes the reaffirmation of Ireland's commitment to human rights made by Minister for Justice, Equality and Defence Alan Shatter TD at Ireland's first Universal Periodic Review at the UN in Geneva on 6 October and which was restated on Monday 10 October at the UN Human Rights Council. However the government this morning rejected some specific recommendations on the rights of vulnerable minorities, which would appear to contradict this strong commitment.

On 6 October during Ireland's UPR examination, the Minister said that the Irish government is committed to social inclusion, to protecting vulnerable groups and to ensuring that people can access processes to assert their rights. On 10 October as part of the Outcome Hearing before the UN Human Rights Council, the Irish government delegation accepted 62 recommendations from countries around the world on strengthening our human rights provision, indicating it would sign further human rights treaties and ratify those it had already signed.The delegation undertook to review a further 49 proposals but rejected 15.

Minister Shatter stressed that the government's "commitment to human rights is based on the bedrock principle that governments, no matter where they are in the world, must always act with the honest intention of respecting the rights of the individual and human dignity. Most fundamentally, they must never show contempt for an individual's humanity and dignity."

But Ireland's UN Ambassador Gerry Corr indicated the State's rejection of some recommendations that would have underwritten this strong pledge to uphold human rights, including one to allow asylum seekers to work while awaiting a decision on their status.

The Minister affirmed last week that "Ireland is committed to having in place measures to promote respect for human rights and proper procedures so any violation of those rights can be speedily rectified". On access to justice, FLAC was glad to note the Minister declaring that "the Government attaches great importance to having accessible, affordable arrangements in place in order that those whose rights have been infringed can vindicate their rights, especially the most vulnerable in society."

In light of this commitment, FLAC welcomes the government's acceptance of recommendations relating to the proposed Human Rights and Equality Commission to ensure that it will be "an effective agent for enhancing the country's commitment to human rights" as well as ensuring it has "adequate and sufficient resources".

FLAC notes with interest that the government has undertaken to examine a number of recommendations before March 2012 including the development of a national action plan on human rights.