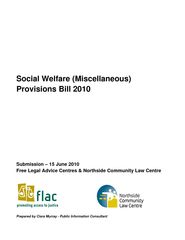 In a joint submission on the Social Welfare (Miscellaneous Provisions) Bill 2010, which was referred by the Dáil to the Joint Oireachtas Committee on Social & Family Affairs yesterday (16 June 2010), both FLAC (Free Legal Advice Centres) and Northside Community Law Centre (NCLC) draw attention to divisive and socially unhelpful provisions contained within the proposed legislation.

The suggested changes to the One Parent Family Payment, for example, "drive a wedge" between different types of lone parent families. Those single parents who are bereaved are offered better support for their children than those who have suffered relationship breakdown or who have been forced from their homes due to domestic violence. "The Government should not make a distinction between people who are parenting alone. It is the children who suffer because payments will be structured on the basis of their parents' relationships. While additional support to the bereaved is welcome, it should not be done to the exclusion of other lone parents," according to the two organisations.

Changes in the Bill would also deny a basic safety net to many people who have no other possible means of support. According to the proposals, the Supplementary Welfare Allowance would be denied if a person turned down a training course which a Community Welfare Officer deemed suitable. According to the two organisations, this will undermine the primary purpose of Supplementary Welfare Allowance which is meant to ensure a basic minimum income for every person to protect against destitution. They say that the government's proposals basically cancel out this objective. In addition, they say that the planned changes add a further administrative burden and will lead to arbitrary decision-making and therefore even more appeals.

"It is noteworthy that the Social Welfare Appeals Office's Annual Report 2009 reflects the need for better decision-making at first instance. Of the 17,787 appeals concluded in 2009, 48.2 per cent (8568 appeals) were decided in favour of the appellant. "This is a very high figure and suggests inadequate and overly restrictive decision-making at first instance," say FLAC and NCLC.

In addition, the Office's workload in 2009 was 43 per cent higher than in 2008. A total of 25,963 appeals were received in 2009 and 7832 further cases were carried over from 2008. "These statistics demonstrate the pressure currently placed on the entire system both at Department level and at appeal stage. Unclear or unnecessary changes to the legislation will only add to the administrative burden," according to the two organisations.

The two bodies conclude that "the priority of the legislators should be to provide tangible supports to those who are most vulnerable rather than restrict access to basic income supports."