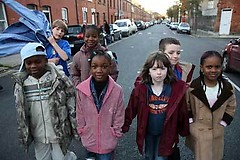 Children of asylum seekers and others living in direct provision are at ever greater risk of poverty because of the government's exclusionary practices, according to FLAC (Free Legal Advice Centres).

FLAC notes that the Finance Bill is to be debated by the Dáil on UN Universal Children's Day, 20 November 2008, and has called on the State to balance its responsibilities for the country's economics with its commitments to protect and promote children's rights.

In particular, FLAC calls on the government to restore Child Benefit for every child living and growing up in Ireland. Parents living in direct provision often cannot provide their children with basic items necessary for their wellbeing and development, says FLAC. Parents receive €9.60 per child per week, an amount which has not increased since it was introduced in 2000.

FLAC's concerns are shared by many other organisations working with asylum seekers, and its call for an increase echoes that already made by the Irish Refugee Council. FLAC calls on the government to reconsider its position on Child Benefit and live up to its own anti-poverty and social inclusion policies.