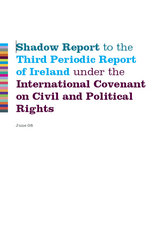 A delegation of Irish NGOs met this morning with members of the Human Rights Committee to present the Shadow Report and clarify issues arising from it. The meeting went very well - informally, the NGO presentation was praised as one of the best the Committee had heard and indeed would serve as a model of best practice. The Shadow Report itself was also highly praised. HRC members in attendance were:

as well as members of the Committee's secretariat

Ms Tanya Ward (Deputy Director, Irish Council for Civil Liberties) gave a presentation on the main points of concern to the coalition of NGOs present. On the issue of the right to life, Sir Nigel Rodley asked for confirmation of the outcome of the 2002 referendum to further restrict the right to an abortion in the case of a danger to the life of the mother, which, she informed him, was rejected by the people.

Regarding the overpopulation of prisons, Sir Nigel Rodley noted that in neighbouring jurisdictions to Ireland, the government leaves sentencing to the courts and asked if this occurred in Ireland. Liam Herrick (Director, Irish Penal Reform Trust) agreed and addressed this point.

Due to time restraints, the issues of religion in education and traveller ethnicity were not covered in the presentation. Thus Mr Lallah asked for an elaboration on religious control of education in Ireland. Dr Alison Mawhinney (Queen's University Belfast) provided the information requested.

As there were no more questions from the Committee, Mr Stephen O'Hare (Pavee Point) made a very quick point concerning the ethnicity of Travellers, on the suggestion of Liam Herrick.