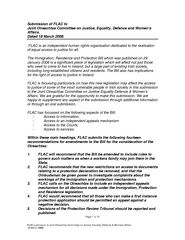 The Immigration, Residence and Protection Bill which was published on 29 January 2008 is a significant piece of legislation which will affect not just those who seek to come to live in Ireland, but a large part of existing Irish society, including long established citizens and residents. The Bill also has implications for the right of access to justice in Ireland.

FLAC is focussing particularly on how this new legislation may affect the access to justice of some of the most vulnerable people in Irish society in this submission
to the Joint Oireachtas Committee on Justice Equality Defence & Women's Affairs. A copy of the submission can be downloaded here.