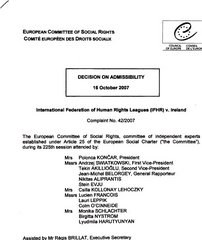 The European Committee on Social Rights, which monitors the European Social Charter, has declared admissible a complaint taken by FLAC and the International Federation of Human Rights Leagues (FIDH). The complaint is about the exclusion of non-resident Irish pension holders from the Free Travel scheme when they return to Ireland. This affects a large number of Irish pension-holders, especially in the UK.

The Irish Government objected to the admissibility of the complaint but the Committee on Social Rights has overruled the objection and has now given the Government until 30 November to lodge its comments on the merits of the complaint. The Committee has also asked other governments and European organisations of trades unions and employers for their comments.

You can view the decision here.