Child poverty must be government priority 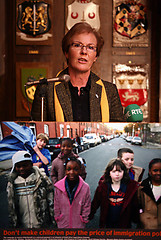 Prior to May 2004, Child Benefit was a universal non-contributory payment paid to the parent/guardian of every child in Ireland. The uncomfortable prospect of so-called "welfare tourism" surrounding EU enlargement in 2004 led to the introduction of an additional qualifying procedure for all social assistance payments: the Habitual Residence Condition. Despite being found to be in breach of EU law in relation to family payments, it continues to create financial hardship for some of the most vulnerable people in Ireland's diverse community.

Guidelines are available to determine whether an applicant may be considered habitually resident. These are loosely drawn from EU caselaw, and include such factors as length and continuity of residence, length and purpose of absence, nature and pattern of employment, applicant's main centre of interest and future intentions. These considerations are not exhaustive and the presumption of non-compliance in the Social Welfare Act 2007 makes it even more difficult for people to access their entitlement.

The Irish government made a commitment in the National Anti-Poverty Strategy of 2003 to eliminate child poverty by 2007 and lift children out of a state of social deprivation. The operation of the HRC since May 2004 in relation to Child Benefit, therefore, appears to be contradictory in that it has the effect of driving certain children into poverty. It has created an anomaly in the law and engendered delays and inconsistent decisions on application and appeal due to uneven application within the Department of Social and Family Affairs.

It is a central objective of FLAC that social welfare law be reformed to protect the most vulnerable people in the State. Child poverty diminishes life opportunities and creates social problems into the future. This issue is however a matter of policy and principle; any change would require very little in the way of legislative amendment.

In a Dáil debate in January 2006, An Taoiseach Bertie Ahern TD defended the importance of Child Benefit as a mechanism to combat child poverty. When faced with the prospect of denying this payment to qualifying migrants' children who were resident abroad in order to save €1 million out of a €350 million budget, he said:

So we were going to be real Scrooges and change a 36-year-old regulation to save €1 million in a calendar year. We did not do that. If we did, there would be people in here calling me the biggest racist that ever was.

Yet surely the same principle is applicable when we speak of the 864 children in Ireland denied the payment in 2006 on the basis of their parents' immigration status. If the numbers are so small, why continue to penalise children who arrive in Ireland involuntarily? Is it merely to save the State some €1.5m out of a €350m budget?

The pre-election manifestos of the major political parties this past spring are interesting in this regard. The Labour Party warns that "child poverty results in incalculable loss of human potential, and stores up problems for which society continues to pay for decades", but remain silent on the issue of universal Child Benefit. Only the Green Party takes a solid stance, making an unequivocal statement of their intention to reintroduce Child Benefit as a universal payment. The Fianna Fail election manifesto states a commitment to quadruple the Child Benefit payment. This clearly shows that it is not a lack of funds which perpetuates the current system and may be another indication that the new government will revisit the issue.

The Department of Social and Family Affairs estimates that 1% of applications are denied at the appeal level because the claimant does not satisfy the HRC. On the issue of asylum seekers being denied Child Benefit, the Department unfortunately provides very little in the way of concrete numerical data.

The integrity of the Child Benefit Register must be ensured for reasons other than solely the needs of recipients. Research to be carried out over the next seven years which will influence future government policy on children living in Ireland intends to draw infant study participants exclusively from the register. This will exclude the voices, needs and opinions of specific groups of children and parents resident in this country.

'Growing Up in Ireland' is a study commissioned by the Department of Health and Children in association with the Department of Social and Family Affairs and the Central Statistics Office. It is to be carried out by a consortium of researchers from the Economic & Social Research Institute and Trinity College Dublin. The information, gathered by following the progress of 18,000 children of various ages over seven years, is designed to assess their social, economic and cultural development. Former Minister for Children (and newly appointed Minister For Justice) Brian Lenihan TD said of the study that it "is an exciting and important project which will provide us with information to improve our understanding of children's lives".

The commissioning of the first ever national longitudinal study of children is to be commended if it provides a sound evidence base for the development of future policy. Unfortunately recognition is not given to the fact that using the current Child Benefit Register as a 'random' child selection mechanism will provide only skewed evidence as it denies participation to children and parents who are not on the register and likely to be most affected by change in policy. Again the same children who pay a high price for maintaining our immigration policy are those deemed sufficiently irrelevant to take part in the research. In effect these are the children of almost all asylum seekers, of undocumented and exploited workers, of those awaiting a decision on their residency status and other vulnerable groups.

The recently announced programme for government includes a commitment to fully implement the UN Convention on the Rights of the Child. Article 26 states that every child has "the right to benefit from social security". This right, in accordance with Article 2 applies to all children without exception. Further, Article 3.1 requires that "the best interests of the child shall be a primary consideration" where children are to be affected by a decision.

Child Benefit must be restored as a universal payment without discrimination. It is time to see whether political promises are to be honoured, and if so, whether serious efforts are to be made to put children's rights first. In the words of children's author JK Rowling (who is quoted by the Labour Party in its manifesto), "poverty is a bad place to live on your own, but the worst place on earth if you have a child with you".

Here in Ireland our record of protecting children and childhood ranks among the worst in Europe. Surely it is time that, in this country, children's rights no longer have to be contingent on those of their parents. Denial of Child Benefit leads to exclusion and discrimination and forces children into poverty; it therefore must be restored immediately as a universal payment.

For more information on FLAC's work in this area, see our campaigns section.