Innovations in Public Interest Law and Litigation from India 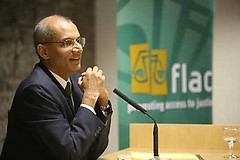 Thanks to the good offices of the Irish Centre for Human Rights at NUI Galway and Dr Joshua Castellino in particular, FLAC was able to benefit from Colin Gonsalves' time when he came to Ireland recently. A long-standing human rights lawyer and activist in India, Colin was interested in raising awareness in Ireland and especially among NGOs and legal actors of the issues in the Indian context, particularly in comparing Irish and Indian strategies around the use of public interest law.

The meetings also gave those present an opportunity to comment on the study being undertaken currently by Community Legal Resource on the development of public interest law and litigation in Ireland. Both sessions, one in the Royal Dublin Hotel and the other in the Distillery Building, were well attended. Participants were moved by Colin's account of how public interest law work, carried out by an alliance of lawyers and NGOs, has made a positive change in the lives of very many people living with poverty and discrimination in India.

A widely respected Senior Counsel of the Indian Supreme Court, Colin is the executive director of the Human Rights Law Network, an organisation with a presence in many Indian states. The HRLN started in 1989 as an informal group of lawyers and social activists with Colin as a core member. Initially the network provided day-to-day legal aid for people living in poverty. It worked in an environment where NGOs were teaching rights but 'access to justice' work, where practical results were obtained from the legal system, was hardly ever carried out. Before long, Gonsalves and his colleagues concluded that legal aid on its own, while essential, did not create sufficient impact on society as a whole. So while the network continues to provide pro bono legal services to those with little or no access to the justice system, it also undertakes public interest litigation, advocacy, legal awareness programmes and investigations into violations.

Winner of the 2004 International Human Rights Award of the American Bar Association in public recognition of his contribution to the area of human rights, Gonsalves has pioneered the use of public interest law in the Indian Supreme Court and has litigated across the spectrum of human rights. Some of his cases are particularly seminal. In response to a petition filed by the Human Rights Law Network in 2001 on behalf of the People's Union for Civil Liberties, the Supreme Court in New Delhi has made a number of orders which have resulted in court orders to implement various food security schemes including the right of children to a lunchtime meal, as part of the right to life. This complex litigation continues and is carried into various strands of Indian law and campaigns by many groups with which the Network is associated, and now by others outside the network as well.

The network values its social activists as highly as its lawyers and collaborates with social movements, human rights organizations and grassroots development groups to enforce the rights of children, dalits, people with disabilities, farmers, HIV positive people, the homeless, indigenous peoples, prisoners, refugees, religious and sexual minorities, women and workers, among others.

See the website of the Human Rights Law Network and of the HRLN's magazine, Combat Law.