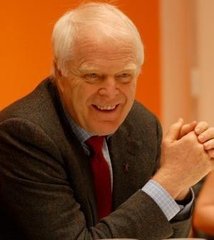 Thomas Hammarberg is one of the leading human rights figures in Europe today. Secretary General of Amnesty International from 1980 to 1986, he was Swedish Ambassador for Humanitarian Affairs from 1986 to 2002, served as regional Advisor to the UN High Commissioner for Human Rights for Europe, Central Asia and the Caucasus for several years, and then became the Council of Europe Commissioner for Human Rights from 2006 to 2012. During his term as Human Rights Commissioner, he visited and reported on almost all of the 47 member states of the Council of Europe, placing special emphasis on LGBT rights and the rights of Roma, and receiving the Stockholm Peace Prize jointly with the European Roma Rights Centre in April of this year for his work on Roma rights.

Commissioner Hammarberg visited Ireland several times during his term of office and his reports spoke strongly about the rights of Travellers, asylum seekers and transgender persons. He also warned about the danger that the current financial crisis and the measures taken to deal with it could impact most severely on the poorest and most vulnerable in society. He is currently Honorary President of the Mental Disability Centre in Budapest.

The late Dave Ellis was a community activist who dedicated his career to working with community groups on issues including welfare rights, legal aid, legal education and legal entitlements generally. He was Community Law Officer at Coolock Community Law Centre (now Northside CLC) for more than 20 years. Dave Ellis subsequently established Community Legal Resource to provide information, training and support for the not-for-profit and community sector.

Attendance is free but as space is limited pre-registration is essential. Please RSVP to Ciara Flatley by email (ciara.flatley[at]flac.ie) or by phone (01 887 3600) on or before Friday 7 December

Please note that this event will also be streamed live online from 6pm on the night.