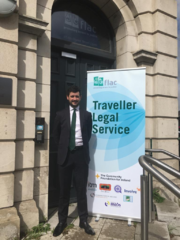 FLAC is concerned at the content of an internal survey of Garda attitudes to ethnic minorities, details of which were published today on the Irish Times website by journalist Conor Gallagher, titled – “Gardaí have negative view of Travellers, survey finds”

“The results of this survey are a shocking insight into the attitudes of the Gardaí, a body with a legislative duty to have regard to the need to eliminate discrimination. It fortifies FLAC’s view, set out in its recent submission to the Department of Justice, that legislation is required to bring the Gardaí within the scope of the Equal Status Acts and to prohibit the practice of racial profiling.”

“Not a single frontline Garda surveyed on attitudes towards Travellers had a favourable view of the community, according to an internal study of the organisation.

Gardaí also had similarly poor views of the Roma community, with almost 75 per cent of frontline members surveyed expressing poor opinions of its members, according to the study published this year, a copy of which was obtained by The Irish Times.”

FLAC recently made a submission on the Department of Justice and Equality’s public consultation to inform the development of a joint strategy for the criminal justice system. Our recommendations, if implemented, would particularly help reduce discrimination against both the Traveller and Roma Community and provide victims of discrimination with an avenue for recourse.

FLAC is also calling on the Department of Justice – in view of its commitment to creating a criminal justice system that upholds human rights - to implement the recommendations of the UN CERD Committee by introducing legislation to explicitly include the functions of public authorities within the definition of “services” in Section 5 of the Equal Status Acts. This would ensure that victims of discrimination at the hands of the Gardaí would be provided with a meaningful avenue for complaint and redress which is currently absent.

In FLAC’s work with Travellers and Roma we have seen how these communities feel disproportionately targeted by the Gardaí, a feeling borne out by the findings of this survey.

Accordingly, FLAC is calling for the introduction of legislation prohibiting racial profiling, to put in place an independent complaints mechanism to handle racial profiling and incorporate racial profiling issues into the training curriculum of police officers as also recommended by the UN Human Rights body.

FLAC (Free Legal Advice Centres) is an Irish human rights organisation, which exists to promote equal access to justice. As an NGO, FLAC relies on a combination of statutory funding, contributions from the legal professions and donations from individuals and grant-making foundations to support its work.

FLAC offers basic legal information through its telephone information line (1890 350 250). Free legal advice is available from volunteer lawyers through a countrywide network of advice clinics (these clinics are currently conducted over the phone) – more at www.flac.ie/help/.  It operates the public interest law project PILA. FLAC provides legal representation in a small number of cases in the public interest.

FLAC was a partner of the JUSTROM programme and recently launched a dedicated legal service for the Traveller community. It also operates a legal clinic for the Roma Community.

FLAC recently made a submission on the Department of Justice and Equality’s (DOJ) public consultation to inform the development of a joint strategy for the criminal justice system.

The news article referenced is available at https://www.irishtimes.com/news/crime-and-law/garda%C3%AD-have-negative-view-of-travellers-survey-finds-1.4334274