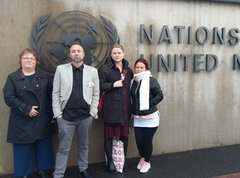 An expert UN body has published a comprehensive blueprint for government action to eliminate race discrimination in Ireland, including an important change to state legal aid for those making claims before tribunals such as the Workplace Relation Commission or Social Welfare Appeals Office.

The UN Committee on the Elimination of Racial Discrimination has issued its recommendations to the Government, following a formal examination of state officials earlier in December. FLAC is pleased that a number of our priority recommendations have been included in the final report.

Welcoming the UN Committee’s observations, FLAC Chief Executive Eilis Barry noted the Committee’s concern about the “lack of legal aid provided for appeals concerning social welfare, housing and eviction, which has a significant adverse impact on Travellers and other ethnic minority groups to claim their rights”.

Ms Barry had travelled to Geneva as part of a civil society delegation, voicing concerns to the Committee about the availability of legal aid when making discrimination or harassment claims and social welfare appeals before Tribunals.

“FLAC are delighted with the Committee’s call to extend the scope of the Legal Aid Board to the areas of law that are particularly relevant to Traveller and other ethnic minority groups, by designating the Social Welfare Appeals Office and Workplace Relations Commission as prescribed tribunals under the Civil Legal Aid Act 1995”, commented Ms Barry.

FLAC had specifically highlighted in its submission that the lack of availability of legal representation in these types of cases means that many Travellers, Roma, persons of African origin and other ethnic minorities cannot present their cases of discrimination and harassment, depriving them of equality before the law and the right to equal treatment.

The UN Committee also raised specific concerns regarding Ireland’s equality legislation, as currently it is unclear to what extent the prohibition on discrimination on the ground of race, ethnicity and membership of the Traveller community applies to public authorities, such as An Garda Síochána and immigration services when they are performing functions which may not come within the definition of “services”. The Committee then recommended “explicitly including the functions of public authorities within the definition of the “services” in Section 5 of the Equal Status Acts”.

Ms. Barry concluded, “The Government is now on notice that action is required if Ireland is to meet its obligations under international human rights law, to ensure race discrimination is eliminated”

FLAC’s Submission to the CERD Committee is available at;

The Committee’s Concluding Observations are available at; https://tbinternet.ohchr.org/Treaties/CERD/Shared%20Documents/IRL/INT_CERD_COC_IRL_40806_E.pdf

FLAC has recently worked to improve access to justice in particular for Roma and Traveller women as part of the JUSTROM (Joint Programme on Access of Roma and Traveller Women to Justice) programme, a Council of Europe initiative. The pilot programme aimed to increase Roma and Traveller women’s awareness of their rights and existing complaint mechanisms, with a particular focus on anti- discrimination and equality of opportunity. Within JUSTROM, FLAC supported the running of legal clinics for Travellers  and Roma. FLAC with the financial assistance of the Department of Justice currently operates a legal clinic for the ROMA community. It also within its limited resources continues to engage in legal representation for members of the Traveller community, primarily in the area of accommodation provision. The experience of those clinics and litigation is drawn on in FLAC’s CERD submission to highlight specific matters of importance to achieving equality for those communities.