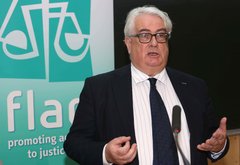 The Hon Mr Justice Frank Clarke’s, Chief Justice of Ireland's opening address at the FLAC@50 Access to Justice Conference in association with the School of Law, Trinity College Dublin is now available to watch below or on FLAC's  YouTube channel.