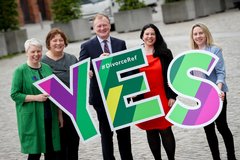 Leading national organisations came together today in a coalition calling for a Yes vote in the upcoming referendum in relation to divorce on Friday 24 May.

FLAC (Free Legal Advice Centres), the Irish Council for Civil Liberties (ICCL), One Family, the National Women’s Council of Ireland (NWCI), Lawyers for Yes and the Children’s Rights Alliance have all come together to call on voters in Ireland to support a referendum that will deliver a better divorce system for people who need it.

On 24 May, people will be asked to approve an amendment to the Constitution to remove the requirement for spouses to live apart for a minimum of four years out of the preceding five when applying for a divorce.  The new proposals would reduce that to two years out of the previous three. It is also proposed for the vote that foreign divorces are recognised here. There will be one question on the ballot paper and voters can either vote Yes to allow both changes, or No to reject both changes.

‘We know from supporting thousands of separating parents and families that we need a more humane and compassionate divorce system in Ireland and this referendum is a step towards achieving that.’

‘Nobody marries imagining they are going to need to go through a divorce process. However, circumstances change and some couples will decide that divorce is the best way forward for them and their family. We should be supporting them in order to decrease the stress and conflict involved, not making it unnecessarily difficult.’

‘We have repeatedly seen that our Constitution is not the right place for complex detail relating to family life – we believe that it is more appropriate to remove the wait time for divorce from the Constitution altogether and allow Government legislate in this area.’

‘It is really important that we continue to take steps towards a complete reform of our divorce and family law system in Ireland to bring it into the 21st century. We still need to see the Family Law legislation published; new specialist child and family  court system as well as a new Children’s and Family Law Courthouse in Hammond Lane built; and appropriate resources for courts to deal with the current volume of work.’

‘The irreconcilable breakdown of a marriage can cause a great deal of stress both emotionally and financially for families. The current 4 year wait period is an extra unnecessary barrier to accessing a legal remedy for these families. This referendum is a chance to improve the process for those in an already difficult situation.

“Children are paying the price for our protracted divorce system. Conflict is very damaging to children and Ireland’s two-stage process exposes them to unnecessary hostility. When parents are at war with each other, the children are caught in the middle. Reducing the waiting period will bring certainty and resolution for families. This is what children need.”