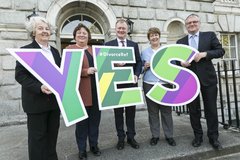 Speaking at the Official Launch of the Lawyers for Yes  Divorce Referendum Campaign in the Law Society today, a coalition of lawyers have come together to call on voters in Ireland to support a #yes vote in the  referendum that will deliver a better divorce system for people who need it.

Catherine Forde BL, who had been involved in the original divorce campaign in 1995, stated at the launch:

’…Time has passed and it is now clear that time limits on access to divorce should be removed from the Constitution.  The proposed amendments to Article 41.3 recognises that the prescriptive regulation of peoples’ day to day lives is a matter for the parliament and not for the Constitution.’

FLAC also campaigned for the introduction of divorce in 1995, and is now calling for a Yes vote in the upcoming referendum. ’The current constitutionally imposed provision on waiting times is abstract and arbitrary and does not reflect the current personal or societal need. It requires spouses including people experiencing domestic violence to remain married and prevents them from severing the ties for an extended period of time. From an access to justice perspective, the current position causes unnecessary delay and extended legal proceedings and costs. A #yes vote will lead to a reduction in the number of legal proceedings and reduced legal cost and expense.’

’None of the exaggerated fears that were raised in 1995 about the destruction of Irish family life have come to pass… A Yes vote on the 24th May is a vote for progressive and sensible reform of our divorce law that is responsive to the needs of Irish families facing the consequences of marriage breakdown.’

”The Divorce referendum proposal, if passed, will reduce the toll of a long divorce waiting period on the children of the marriage as well as the spouses. The change will also reduce the financial distress suffered by separating couples by removing the some of the duplication in the current system by making divorce within a reasonable period of time a reality and so getting around the need for a legal separation.’

‘We need a coherent framework for the regulation of foreign divorces. This referendum if passed will allow the Oireachtas provide such a framework.’

On the 24th May 2019, there will be a referendum to change the Constitutional provisions which relate to two aspects of the regulation of divorce; namely how long people must be living apart before they can apply for a divorce, and secondly the recognition of foreign divorces.