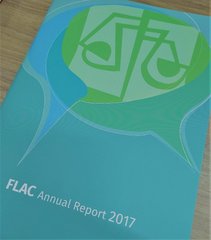 Speaking ahead of the launch, Minister Flanagan said “I am very pleased to launch FLAC’s annual report for 2017. It is a welcome opportunity to thank all the staff, volunteers and supporters who make its work possible. I also want to acknowledge the Citizens Information Services who work so closely with FLAC in those clinics.”

13,814 individuals received legal advice from volunteer lawyers at clinics run in conjunction with the Citizens Information Service at 66 locations nationwide. Family law (34.5%), employment (15.8%) and wills/probate (9.2%) were the most common legal queries.

110 social justice organisations received legal assistance through FLAC’s public interest law project PILA, by private practitioners acting pro bono. The impact of this work was evident in March 2017 in the judgment of the High Court in Sinnott V The Minister for the Environment which vindicated the right to a secret ballot for people with a visual impairment.

FLAC is an Independent Law Centre that takes on cases where this is in the public interest. In 2017 it had 103 casefiles, the most prevalent issues were housing /landlord and tenant (29%), social welfare (19%) and discrimination (16%).

Housing issues were also prominent in FLAC’s policy work throughout 2017. FLAC made a detailed submission to the Department of Justice and Equality in relation to its review of the Personal Insolvency Act. For some time FLAC has been concerned about the position of mortgage holders in long-term arrears and has advocated for the need for Courts to have greater flexibility in these complex cases and a dedicated court/tribunal. FLAC believes that the recent sale of thousands of mortgages in arrears to ‘vulture funds’ exposes borrowers to a greater risk of losing their properties due to the uncertain nature of ‘vulture funds’.

Eilis Barry, FLAC Chief Executive stated “There is significant unmet legal need in relation to housing and homelessness. From a legal rights perspective, the following actions are urgently required:-

These actions are required as a matter of urgency and given the complexity involved, work needs to begin immediately as a priority.”

Minister Flanagan added “Over 25,000 people received assistance in 2017; either via FLAC's telephone information line or through its 66 legal advice clinics countrywide. And I would also acknowledge the financial support provided to FLAC by other bodies including philanthropic donors, the Law Society, Bar Council and legal practitioners.”