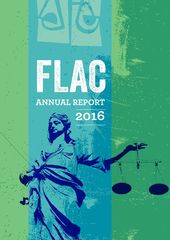 Speaking ahead of the launch, Minister Flanagan said: “I am very pleased to launch FLAC’s annual report for 2016. It is a welcome opportunity to thank all the staff, volunteers and supporters who make the work of FLAC possible.  Over 25,000 individuals received assistance throughout 2016; either via FLAC's telephone line or in its 67 clinics countrywide.  The assistance of the Citizens Information Services who work so closely with FLAC in those clinics must also be acknowledged. FLAC has long campaigned for those in mortgage arrears and I would like to take this opportunity to reaffirm this Government's commitment to supporting those, particularly through the Abhaile scheme launched in October 2016.

The numbers seeking assistance clearly demonstrate an acute need for legal advice and aid. In that regard FLAC Chief Executive Eilis Barry welcomed the recent announcement of the Legal Aid Board to defer its decision to restrict referrals to the District Court Family Law Private Practitioners to priority matters, which they defined as domestic violence and enforcement of maintenance, but not access, custody or guardianship. The Private Practitioner’s scheme is used by applicants who are unable to get an appointment in a legal aid law centre before a court date.

“This deferral will avoid distress, confusion and uncertainty for the applicants and their families and disruption for the courts," said Ms Barry. She noted that excessive delays already exist in some Legal Aid Board law centres which would have been exacerbated by the restriction: “Waiting times for an initial short consultation vary with the longest being 36 weeks in Longford, 29 weeks in Navan and Nenagh and 23 weeks in Kilkenny. Waiting times for a second consultation also vary but are up to 49 weeks in Tallaght, and 43 weeks in Jervis Street. The High Court has stated that waiting times should not exceed 2-4 months. The current waiting times in some centres greatly exceed this limit.”

Ms Barry also called on the Legal Aid Board to drop legal aid charges for people experiencing domestic violence. “Civil legal aid fees should be automatically waived for victims of domestic violence when seeking safety, protection or barring orders.  In March of this year, the UN CEDAW Committee specifically recommended that Ireland end the requirement for victims of domestic violence to make financial contributions for civil legal aid when seeking court protection. The UN has now followed this on 14 July with a general comment urging states to ensure access to ‘financial aid and free or low-cost high quality legal aid’. The Law Society of Ireland has also echoed our call to drop these charges. We are hopeful the Minister and the Legal Aid Board will heed these calls and remove this financial barrier for victims seeking crucial legal protections,” she said.

FLAC welcomed the review underway on eligibility requirements for civil legal aid, which Ms Barry said were badly out of date. She also warned that the new Assisted Decision Making law, while welcome and overdue, will also place considerable demands on the Board. “The Legal Aid Board is a fundamental part of the administration of justice in Ireland - it seeks to ensure the constitutional right of access to justice which is inherent in the rule of law. FLAC believes there is a need for a comprehensive and realistic review of the budgetary requirements of the Board and we hope that this will be taken into account for Budget 2018.”

FLAC chairperson Peter Ward highlighted the unwavering commitment of FLAC volunteer lawyers in legal advice clinics all over Ireland: “Getting basic legal information and advice to people when and where they need it is the first step in ensuring access to justice.  FLAC volunteers provide this in communities all around Ireland. We are extremely grateful for the time, professionalism and expertise that they contribute, week in, week out.” Mr Ward also acknowledged and thanked FLAC’s partner network of Citizens Information Centres and other community centres nationwide which enable legal volunteers to provide much needed assistance to the public.

Peter Ward noted the significant impact of FLAC’s work over the last year: “It was very positive to see the introduction in 2016, after much campaigning by FLAC and others, of the Abhaile scheme of legal aid for people in mortgage arrears in danger of repossession.” He also welcomed a law reforming legislation underpinning the Financial Services Ombudsman’s office, the Central Bank and Financial Services Authority of Ireland (Amendment) Act 2017. It was sponsored by Sinn Féin’s Pearse Doherty TD and based largely on FLAC’s ground-breaking 2014 report, ‘Redressing the Imbalance’. “This new law will make it easier for consumers who have been victims of financial malpractice to make complaints,” he commented.

Eilis Barry highlighted the strategic legal casework done by FLAC throughout the year, including a case where a mother in Direct Provision won compensation for a breach of her rights from excessive delay in processing her application for subsidiary protection.