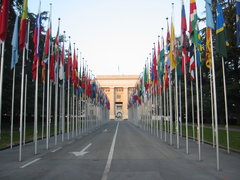 An expert United Nations body on women’s rights has today published a comprehensive blueprint for government action to advance gender equality in Ireland, including an important change to state legal aid for those experiencing domestic violence.

The Committee’s call follows a formal UN examination of Irish state officials in Geneva in mid-February on how Ireland is meeting obligations under an international bill of rights for women.FLAC had attended this event as part of a civil society delegation, voicing concerns to the Committee about the availability of legal aid for people experiencing domestic abuse.

In its recommendations to the Government, the UN Committee on the Elimination of all forms of Discrimination against Women highlights barriers to women, especially those on low incomes, in accessing legal aid. These include long waiting lists, restrictive financial eligibility criteria and the requirement to pay financial contributions where safety, protection or barring orders are sought.

Welcoming the Committee’s recommendations, FLAC (Free Legal Advice Centres) Chief Executive Eilis Barry said, “We are happy in particular with the Committee’s call to end the requirement for victims of domestic violence to pay financial contributions when seeking access to legal protections, as FLAC had specifically highlighted this issue in its submission.”

“However, the Legal Aid Board can give immediate effect to the UN Committee’s recommendation by introducing an automatic waiver of financial contributions in cases of domestic violence,” said Ms Barry.

“The 2017 campaign theme for International Women’s Day is ‘Be Bold For Change’. In this spirit, we are calling on the Legal Aid Board to be bold and take prompt, decisive action to ensure that access to protection is available to all, not just those who can afford it,” concluded Ms Barry.

29. The Committee recommends that the State party increase funding for civil legal aid services, review the financial eligibility criteria and end the requirement for victims of domestic violence to make financial contributions for civil legal aid when seeking court protection under domestic violence legislation to ensure access to justice to all women without sufficient means.

5. The UN Convention on the Elimination of all forms of Discrimination against Women (CEDAW) was adopted in 1979 by the UN General Assembly. It defines discrimination against women and sets up an agenda for national action to end such discrimination where it exists. Ireland acceded to the Convention in 1985 and to the Optional Protocol in 2000 and is obliged to report to the UN Committee on CEDAW at regular intervals. The examination underway next week is based on a combined 6th & 7th periodic report from Ireland. You can read more including Ireland’s state reports at http://www.genderequality.ie/en/GE/Pages/CEDAW
6. FLAC’s submission to the CEDAW Committee (Dec 2016)  is at http://www.flac.ie/publications/flac-cedaw-submission/

7. An Irish civil society Shadow Report prepared by the National Women’s Council of Ireland, to which FLAC contributed recommendations, in advance of Ireland’s examination under the CEDAW is at: http://www.nwci.ie/images/uploads/NWCI_CEDAW_SHADOW_REPORT_2017.pdf