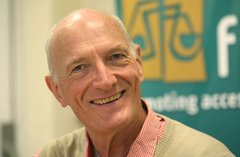 A leading South African Judge visiting Dublin has underlined the key role of an independent judiciary for the rule of law and the protection of constitutional rights. Constitutional Court Justice Edwin Cameron was speaking at the annual lecture of FLAC (Free Legal Advice Centre) in Dublin city centre tonight. At the same event, FLAC’s Chairperson Peter Ward voiced concern about recent attacks on the judiciary and their implications for democracy.

In his lecture, Justice Cameron, who is a gay man living with HIV, recounted how South Africa has changed from an apartheid legal system that excluded, subordinated and humiliated most South Africans to one that is built on the opposite ideals. “The story is how a legal system calculated to thwart access to justice is evolving into one designed to secure it and to safeguard human dignity and basic human rights, with increasing social justice for all. An important part of that story is how non-governmental legal service organisations - like FLAC - played a crucial part in the transition and still do,” he said.

Introducing the judge, FLAC Chairperson FLAC Peter Ward said he was “an inspiration to all of us who believe in the central and vital role of an independent judiciary in a constitutional democracy as something to be valued and protected.”

Given this key role of the judiciary as an independent arm of government, Mr Ward expressed grave concern at recent attacks by Minister Shane Ross on the Irish judiciary. As an organisation seeking to widen access to justice, FLAC had always supported the need for a diverse judiciary that reflects society and thus supported the need for reform, said Mr Ward. However, Minister Ross had accused the judiciary of resisting reform that was required because judges could not be trusted not to forget their oath, of being ‘masters of delay’, of leading ‘charmed lives’ and living in a protected citadel, which Mr Ward described as “Trumped-up charges”.

Characterising the remarks as being gratuitously offensive and factually incorrect, Mr Ward said what was more worrying was “the attempt to validate, at the highest political level, offensive and undermining remarks about another pillar of government which can only serve to undermine it in the public eye.

“We must be willing to reassert the central role in our institutions of state of an independent judiciary who must be recognised and supported as such. We depend on them to play the vital role accorded to them under our Constitution and they must be free, independent and fearless in that role. We must also be willing to speak out in defence of these core principles and value when they are under attack,” said Mr Ward.

Justice Cameron was in Dublin just ahead of an auspicious occasion: the 20th anniversary of President Mandela’s signing of the new South African Constitution into law on 10 December 1996.

FLAC holds its lecture annually in memory of Dave Ellis, a community lawyer and activist. Remembering Dave, FLAC Chief Executive Eilis Barry said he saw law as a system of values: “Dave believed that a healthy democracy requires equality and inclusion. It needs a government and legal system that works for all and not just elites.”

“Dave would undoubtedly stand full-square behind the values represented by our speaker, Justice Cameron, tonight. He stood for human dignity and equality for all, where diversity is a strength. He would have contested values based on oppression, exclusion and dominance. We in FLAC are proud to remember him today,” she concluded.