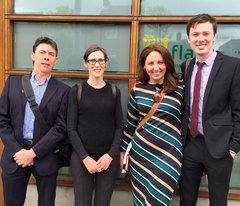 The Oireachtas Housing and Homelessness Committee will hear today from legal rights group FLAC on how the state might avert the threat of homelessness to the 30,000 households in long-term arrears on their mortgages, as well as the need for adequate legal supports and avenues for remedying their housing complaints.

According to Mr Joyce, the number of more intractable arrears cases is not being addressed quickly enough. “FLAC believes there is at present an over-reliance on arrears capitalisation and split mortgages as permanent restructuring arrangements, at the expense of other options such as debt write-down and term extensions. This may feed into the homelessness crisis for some people both now and far into the future, given the higher financial pressures of these options for over-indebted borrowers,” he stated.

“The increased rate of repossession applications in our courts also indicate than rather that being a way to get people to cooperate with lenders, such proceedings are becoming by default a way of resolving more intractable arrears cases,” he continued. While some repossessions are inevitable, FLAC believes that the playing field is still uneven between borrowers and lenders, and the Central Bank’s Code of Conduct on Mortgage Arrears, which is not broadly admissible in legal proceedings at present, should finally be made a regulation usable by borrowers in appealing lenders’ decisions on a payment arrangement proposal.

The organisation also called for the restoration of Mortgage Interest Supplement for those who suffer a short-term loss of income through illness or job loss. “At present there is no state support for households which suffer temporary setbacks making their mortgage interest payments unaffordable for that period. The reality is that if such households are forced into bankruptcy and homelessness, they will become a far greater burden on the state than through providing a time-limited income support,” stressed Ciaran Finlay.

Legal Officer Eithne Lynch, of FLAC’s Public Interest Law Alliance Project, updated the committee members on the ongoing collective housing complaint by local authority tenants to the European Committee of Social Rights. The complaint outlines appalling and widespread sub-standard housing issues across 20 Local Authority housing estates. The tenants were assisted by local housing rights groups and academics in forming the complaints and FLAC though its associate membership of international rights group FIDH lodged it with the Committee. A decision is expected before the end of 2016.

1)        Ensure that the Code of Conduct on Mortgage Arrears with its MARP process continue to be the template for lender/borrower negotiations on rescheduling mortgage arrears, with access to assistance from MABS money advisors becoming mandatory for borrowers.

2)        Make the Code of Conduct on Mortgage Arrears a ministerial regulation expressly admissible in any legal proceedings before an adjudicating body.

4)        Establish a mortgage rescheduling tribunal on a statutory footing to hear appeals from borrowers unhappy with the outcome of the MARP process.

5)        Give borrowers the requisite financial and legal advice and representation to make out their case to this Tribunal and into the courts if it proved necessary.

6)        Ensure that such proceedings are heard in camera, i.e. in private, to encourage full participation.

7)        For those whose mortgages are declared unsustainable on financial grounds, promote access to an expanded Mortgage-to-Rent scheme should be promoted, and the existing scheme should be immediately overhauled.

9)        Examine the possibility of imposing a moratorium on the evictions of the tenant/s via (temporary) amendment to the residential tenancies legislation, where the property in which they live has been sold to a ‘vulture fund’.

10)     Restore a targeted use of the MIS payment to assist people with a short-term mortgage arrears problem through their financial difficulties.

12)     Reverse the cuts to social welfare payments to people under 26.

13)     Expressly include the right to housing in Irish domestic law.

14)     Broaden the remit of the Civil Legal Aid scheme to include applicants facing eviction from both private and rented accommodation, including local authority accommodation.

15)     Establish the Housing & Homelessness Committee on a permanent or semi-permanent basis to monitor progress in this critical area.

6. The collective housing complaint was brought by local authority tenants in 20 Local Authority housing estates assisted by a number of local housing groups and academics. It was deemed admissible for further investigation by the European Committee of Social Rights   on Tuesday 17 March 2015. The complaint had been lodged with the Committee in July 2014 by FIDH in collaboration with FLAC as its associate member in Ireland.  Read more at http://flac.ie/news/latestnews/2015/03/24/european-rights-body-to-examine-local-authority-te/