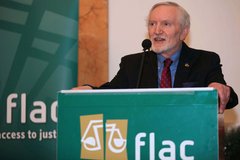 Speaking in Dublin this evening (3 December 2015), FLAC’s Senior Solicitor and life-long social justice activist Michael Farrell identified serious weaknesses in the protection of human rights in Ireland, despite the various treaties and laws which aim to protect individuals’ rights and liberties.

Noting that the rights of many of the most vulnerable in Irish society have been overlooked, and commenting on reported signs of a recovered economy, Mr Farrell said: “We must not go back to ‘business as usual’ and we must try to use the lessons from the crisis to put in place mechanisms to protect the vulnerable against any future crisis and to repair as much as possible the damage done by the crisis just passed.”  He said that many agencies, lawyers, the voluntary legal sector, academics and government could all put a greater focus in their work to advance human rights in Ireland.

Mr Farrell, who is retiring from his role in FLAC at the end of 2015, was delivering FLAC’s 9th annual Dave Ellis lecture, which commemorates the late Mr Ellis, a community law activist. Commenting ahead of the event, FLAC Director General Noeline Blackwell said: “Michael is an internationally recognised human rights campaigner. He has led an extremely varied career spanning over forty years but his lifelong commitment to the protection of human rights and enabling access to justice for all stands firm throughout. We have been fortunate in FLAC to benefit from his dedication and huge knowledge during his time here.”

In addition to the lecture, the event marked an award to 77 volunteer lawyers. These solicitors and barristers volunteer with FLAC mainly through the legal advice centres which the organisation runs in partnership with Citizens Information Centres, and with the organisation’s Public Interest Law Alliance.

According to Ms Blackwell: “These people are part of a strong, countrywide movement of volunteers who advance access to justice by passing on legal knowledge that people need in their daily lives. They also are part of the tradition of achieving social justice through the law that Michael so fluently speaks of tonight.

“FLAC is indebted to them all for their steadfast commitment and we are delighted they are here tonight to receive our Golden Pin for 2015.”

A video clip of his talk is below and you can also view the video of the lecture on FLAC's YouTube channel.

You can also read a transcript of the talk or download Michael's address as a Word doc at this link.