Public Interest Litigation: Does it work? 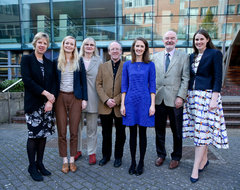 The seminar, titled Public Interest Litigation: Does it work?’ addressed the difficulties in accessing justice and taking cases of major social importance. Speakers included Dr Lydia Foy, a transgender rights champion who took landmark legal proceedings which led to the passing of the Gender Recognition Act 2015, and Maeve O’Rourke BL, who has provided pro bono legal assistance to the Justice for Magdalene advocacy group, which represents those seeking reparation for the abuses suffered at the Magdalene Laundries.

Also speaking at the event was solicitor Kevin Brophy, who has worked on a number of equality cases including that of Senator Katherine Zappone and Dr Ann Louise Gilligan in their attempt to have their marriage recognised in Ireland.

Other speakers included Professor Gerry Whyte of Trinity College Dublin, who has published extensively in the areas of public interest law and constitutional law, and Rachel Power, Manager of the Public Interest Law Alliance (PILA), who talked about the role of NGOs in taking and supporting public interest law cases. PILA’s parent organisation, FLAC, represented Dr Foy throughout her landmark case for recognition.

The seminar is part of a series organised by Dr Mary Rogan, Head of Law at Dublin Institute of Technology, and Professor Ivana Bacik, Trinity College Dublin in conjunction with the Public Interest Law Alliance.

Dr Mary Rogan, Head of Law at Dublin Institute of Technology commented: ‘The Changing Ireland, Changing Law’ series has highlighted the many barriers people face when seeking access to justice. We have heard the stories of courageous and tenacious litigants, lawyers who support people to vindicate their rights, and the NGOs who work to reform the systems which create the conditions for these cases. It is an honour to work with the Public Interest Law Alliance as our lead partner on this project, which has done so much to highlight and support public interest litigation in Ireland’.

Rachel Power from PILA commented: ‘Today’s seminar demonstrated the range of activity that is necessary to create the space and conditions for potential cases to emerge and for them to be successful, and the need to understand social change in broad, complex terms. As embodied in the ‘Changing Ireland, Changing Law’ project itself, it was ever apparent the depth that collaboration and partnership brings to implementing tangible change on the ground.’