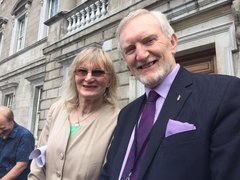 Today (Tues 8 September) it has become possible for the first time for transgender persons to apply to be recognised in their true gender, as the Department of Social Protection publishes the application forms for obtaining an official Gender Recognition Certificate.  That certificate will then enable Trans persons to obtain a birth certificate in their preferred gender.

Michael Farrell, senior solicitor with FLAC, which has represented Dr Lydia Foy in her lengthy legal battle to be recognised in her female gender, commented:

“This is a tremendous achievement for Lydia Foy 22 years after she first applied for a new birth certificate so she could be officially recognised in the gender in which she lives every day.  It is a great day too for the whole transgender community, who will benefit from Lydia’s long battle.  And it is a good day for Ireland, which was for so long so rigid and intolerant on gender related issues.  With the Marriage Equality referendum and the Gender Recognition Act we have taken two great steps forward this summer towards becoming a kinder and more compassionate society.

Ms Foy said “I am delighted that today I can begin the process of obtaining a birth certificate that shows me as the person I am – 23 years after I first asked for it.  I am also proud that my case has opened the way for a new generation of Trans young persons who will not have to go through the pain and suffering that an older generation had to endure just so that we could be ourselves.

“I am grateful to Ministers Joan Burton and Kevin Humphreys and the many people from all ends of the political spectrum who at long last listened to us and made this happen – and, yes, I will be applying for my Gender Recognition Certificate just as soon as I can complete the Application Form”.

FLAC Director General Noeline Blackwell said that FLAC, as a legal human rights body, was proud to have been able to use the law to help secure the rights of a vulnerable and marginalised community. “We would like to pay tribute today to Lydia Foy who has fought a long, lonely and often hopeless seeming battle to get us to where we are today.  The Transgender community and Irish society as a whole owe her a debt of gratitude for her courage and perseverance,” she said.

“There is more to be done but today a major step forward has been taken in breaking down longstanding walls of prejudice and lack of understanding,” Mr Farrell concluded.