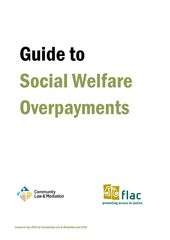 Legal rights groups FLAC and Community Law & Mediation have today launched two guides to the law underpinning the recovery of social welfare overpayments.  The guides are aimed at helping people to understand their rights and obligations when a claim is made by the Department of Social Protection for return of money which the Department says has been overpaid.

The organisations say that many who contact them do not understand the claim made against them and don’t know how to get the information that they need.  “Some of the claims for overpayment go back years.  Some of them arise from mistakes made by the Department or by the claimant. While some people may understand immediately while the claim is being made against them, many more are distraught when an unexpected bill comes in with immediate demands for repayment. The guides are to help people understand what is involved,” said Jane O’Sullivan, Acting Managing Solicitor with Community Law and Mediation.

The two groups stress that the state must be able to recover money which has been unlawfully or incorrectly paid out, but they are concerned that people - many of whom are on low incomes or are reliant on social welfare - are being hit with sizeable claims that could leave them at risk of deprivation or even destitution.  Where they claim an overpayment, the Department of Social Protection can deduct up to 15% of a person’s net weekly earnings without their consent and, if the person involved consents, they can deduct more.

“We know the Department has to protect the public purse and we do not dispute that in any way. We want to ensure that the law is clearly understood by all sides so that the system of recovery operates in a fair way that respects human rights,” explained FLAC Director General Noeline Blackwell.  “People may be unaware of their rights to question or appeal an overpayment claim, especially where they are not provided with clear evidence. If you cannot afford private legal help, you won’t be able to seek state civil legal aid either as it not available for appeals cases, leaving people at a risk of serious injustice.

“Overpayments can occur through error on the part of the claimant or the Department, and not just through a deliberate fraudulent act.  The enhanced recovery powers erode the State’s own minimum level of basic income, based on the Supplementary Welfare Allowance rate of €186.  It is important to be very clear that the Department is of course entitled to recover overpayments.  However, this must be done in an appropriate and proportionate manner and must not force people into destitution.” commented Ms O’Sullivan.

Two guides have been prepared; one more detailed which is intended for advocates and a shorter version which provides a basic overview of overpayments and what to do if the Department makes an overpayment claim against you. They are free to download from the FLAC and CLM websites. The organisations say they hope the guides will assist people and their advocates in dealing appropriately and promptly with an overpayment claim, with FLAC adding that last year 13.5% of calls about social welfare to its telephone information line were on overpayments – the third highest area of enquiry - with a further 6.8% asking about fraud.

Main points from the guide include:

Mary is a pensioner who took part in a Community Employment scheme and continued to receive her non-contributory pension. Some time after it ended, she was told that she should not have received the pension while she was working and the Department demanded that she pay back the monies she had received for that time. Mary didn’t have the money to do that and contacted FLAC who appealed against the ruling. FLAC was able to point out to the Department that Mary had told the social welfare services at the time and was led to believe that she could continue to receive the pension while working. She had also completed several official forms which showed that she was earning money and paying PRSI. The social welfare inspector had been present at the beginning of the Community Employment scheme. Even more telling, a Department circular on the job scheme at the time contained conflicting advice on pension entitlement.  As a result of the appeal, the date of the claim was changed so that Mary ended up with no obligation to pay any money.

The Department of Social Welfare claimed that Theresa had been overpaid because they alleged she had falsely claimed for a single parent allowance while living with her husband. Although convinced that she would have to pay the money, Theresa was upset that she was being considered a fraud, as she was clear that she had never claimed what was not due.  When FLAC appealed the case on her behalf, it got background information about how the claim had been constructed. It turned out that the Department’s inspectors had seen a car outside Theresa’s house registered in her husband’s name and had noted that when their child was born, the address for the husband on the birth certificate was the same as Theresa’s. She was able to show in her appeal that an official had suggested for the sake of simplicity that both parents use the same address for the birth registration, even though they had split up; and although the husband had bought the car in his name, it was for Theresa’s use and that of their children. The overpayment claim was disallowed on appeal.

Diarmuid, who is in his seventies, receives a non-contributory state pension.  He received a letter from the Department for Social Protection, saying that he was liable for an overpayment of about €13,000.  A hand-written note on the letter indicated that it arose from a Jobseekers Allowance claim he had made in the 1980s, more than 20 years before.  Diarmuid was given a form providing a right to comment but no further detail about the alleged debt, or of any decision that could be appealed.  He was told that a deduction of over €30 per week would be made from his pension.  Diarmuid was very distressed when he attended the CLM Law Centre; he could not recall in any detail the circumstances of the claim.  The Law Centre sought his file under the Freedom of Information Acts and also sent a letter to the Department disputing the existence of the debt and seeking the original decision from the Deciding Officer, so that he could challenge it. The Department replied by letter advising that, as the debt related to a claim in the 1980s, the files were likely to have been destroyed.  The Department’s Debt Management Unit replied soon after that “having regard to the particular circumstances of this individual case, it has been decided not to pursue the recovery of this overpayment”.