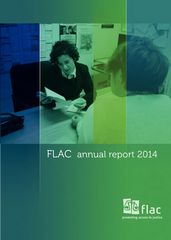 Minister for Justice & Equality Frances Fitzgerald today launched the Annual Report for 2014 of legal rights group FLAC. Launching the report and a guide to the law on neighbour disputes , she said “I want to commend FLAC on another successful year. FLAC continues to play an important role in the justice system. Ensuring equal opportunity and access to justice is essential to fostering equality and building an inclusive society.”

Pointing to the work done by the organisation in 2014, FLAC chairman Peter Ward SC noted that “access to justice is a fundamental part of any democracy.  FLAC’s analysis on consumer credit and debt during the year shows that there are still serious problems for those who need to use the law to achieve a fair outcome or to ensure that there is respect for their rights. Lack of money, lack of knowledge continues to lead to inequality. That is in addition to people who need help just understanding the general law as it affects them.  Through FLAC and its partner services, we were able to help almost 28,400 people in 2014.”

The organisation said that the number of people requiring legal help from its telephone information line was up just over 10% on last year to 15,005. Commented Director General Noeline Blackwell: “You might say FLAC’s legal information helpline is a social thermometer for issues affecting people in Ireland and 2014 has been our busiest year yet. For the second year running, our phone-line saw a big increase in calls on housing problems, including landlord and tenant queries, up 81.7% over 2013. This is on top of an 83% increase over 2012. This makes housing the second largest area of enquiry on our phone-line, with family law and credit & debt law problems the other top areas.”  She added that the organisation was also launching a new legal guide for the public on Anti-Social Behaviour and noise in neighbourhoods because this was a regular topic on the phone-line.

Of 81 locally based free legal advice centres, maintained by volunteer lawyers and run in conjunction with Citizens Information Centres, 70 participated in FLAC’s data collection programme in 2014. This gave the organisation data on 13,384 cases across 20 counties. In the centres, the main issue continued to be family law enquiries but housing queries were also up, at 6.4% of overall visits.

Speaking at the launch, FLAC Senior Policy Analyst Paul Joyce noted that while changes announced in May - to apparently allow the courts to review unreasonable refusals by creditors of insolvency arrangements - are welcome, they need to be enacted quickly, given the recent spate of repossession proceedings. “FLAC remains concerned that despite these reforms, many over-indebted people will still not be able to access the advice and support they need to reach a fair resolution, be that a personal insolvency practitioner or lawyer, due to lack of resources,” he stressed.

Mr Joyce also warned that Ireland needs more robust legal protections for consumers of credit and financial services.  Referencing FLAC’s flagship analysis piece in 2014, Redressing the Imbalance, he said: “This report concludes that the failure to properly regulate lenders and lending at both national and EU levels was one of the principal causes of the personal debt crisis. We concluded that Ireland’s consumer credit laws remain complex, piecemeal and inaccessible to most consumers, leaving many at risk of exploitation in the future. The reliance on codes as opposed to binding legislation is a prime example. This has become manifestly obviously in relation to the Code of Conduct on Mortgage Arrears.”

FLAC’s Annual Report 2014 also reported on what Ms Blackwell called the “matchmaking function” of its Public Interest Law Alliance. Last year, PILA matched 95 social justice organisations needing legal support with pro bono legal assistance. In a survey carried out through PILA, the organisation found that three-quarters of the 464 lawyers who responded did pro bono work, with half of those so regularly. According to Ms Blackwell, “One of the great privileges of working with FLAC is the interaction with volunteers. FLAC aims to create equal access to justice for all and does this with a wide variety of partners; in particular, we work with lawyers who volunteer their time and expertise. Their impact is enormous.”

A further breakdown of stats by area is below. Regional data is available on request.