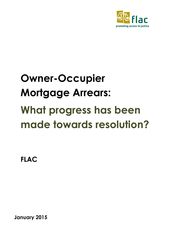 An in-depth analysis of the steps taken by the state and lenders to resolve the owner occupier mortgage arrears crisis indicates that the Government’s current approach is not working and warns that repossession is set to become the main mechanism for addressing long-term owner-occupier arrears cases unless the State takes more decisive action.

Legal rights group FLAC has published a policy paper that examines in detail recent data on arrears, restructuring and repossession activity issued by state bodies. The paper shows that while the level of arrears is dropping overall, thousands of households are being left stranded by lender’s current strategies and may well face repossession of their homes.

The paper, entitled ‘Owner-Occupier Mortgage Arrears: What progress has been made towards resolution?’ analyses figures provided by the Department of Finance, the Central Bank and the Insolvency Service of Ireland respectively for the period from September 2013 to September 2014. Key findings include:

Taking all these together, FLAC believes that the government’s stated position that repossession of family homes is a last resort is not borne out. According to FLAC Senior Policy Analyst Paul Joyce, “The core question to be answered is whether the government really intends to prevent the repossession of family homes on an increasing scale. The current mechanisms are not resolving the more problematic cases and, left in the hands of lenders, there is little sign that this is likely to change.”

The organisation proposes a number of recommendations arising from the findings. “An independent authority should be established to assess the viability of mortgages in arrears and where appropriate, to impose solutions on lenders that may involve compulsory write-down. Alongside this measure, the mortgage-to-rent scheme must be enhanced to deal with families in truly unsustainable arrears,” said FLAC Director General Noeline Blackwell.

“The indicators are here for all to see. If we want to avoid making an already dreadful housing crisis even worse, action must be taken now. Behind the wealth of data presented in our paper there are, quite simply, real human beings who deserve to have their basic rights respected and protected,” she concluded.

“FLAC hopes to present this analysis to the members of the Joint Oireachtas Committee on Finance and Public Expenditure which has done very useful work in holding lenders to account on their arrears resolution strategies. We hope the Committee will find the conclusions of this paper useful in pursuing a more effective solution to the arrears crisis before more time is wasted for those households left high and dry by current policy,” concluded Mr Joyce.