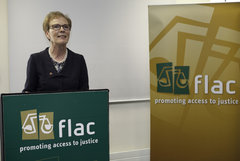 Legal rights group FLAC today expressed its dismay at news that a state scheme providing mortgage arrears advice will continue relatively unchanged, despite the fact that it has not delivered the promised assistance to people in mortgage arrears.

Following an internal review conducted over the autumn, the a committee chaired by the Department for Social Protection has proposed only minimal changes to the Independent Financial Advice Service of the Mortgage Arrears Information and Advice Service. In reaction, FLAC has said that it was extraordinary that even where the government recognised that the current advice scheme wasn’t working, they weren’t prepared to change it.

According to FLAC Director General Noeline Blackwell, “it is both frustrating and disappointing for borrowers that no effective steps are being taken to amend a scheme that is too limited and is only available to borrowers when it is too late to make a real difference.” She expressed FLAC’s concern that this means government promises made back in March 2013 - to ‘even up the exchange’ between borrowers and lenders - have been forgotten.

Commented Ms Blackwell, “The scheme as it stands is deeply flawed and it seems there are no real plans to change it. Advisors will only be able to explain the terms of a lender’s offer to the borrower, not say whether it is good, bad or indifferent. And borrowers will still only get that explanation when the lender makes a long-term offer – exactly when they have no more room to negotiate.

She said that FLAC had contributed to the review and, like many others who worked with those in mortgage arrears, it had proposed a scheme that worked with borrowers while they were actually in negotiation with the banks rather than when the negotiations had concluded.

FLAC is also disappointed with a number of other aspects of the review, including its finalisation prior to discussions with stakeholders – a discussion which apparently is now due to take place in January 2013.