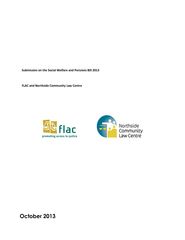 In a joint submission on the draft law to cement changes to the social welfare code arising from the Budget, two legal rights organisations, Northside Community Law & Mediation Centre (NCLMC) and FLAC (Free Legal Advice Centres) today raised a series of concerns on both the Bill's content and its process.

The groups were critical of the government's failure to adjust how the Social Welfare measures are unveiled and rolled out in the budget process, despite there now being more time available through an earlier Budget day. "There is simply not enough time for consideration and debate on matters of fundamental importance to people who were not consulted in the lead up to the budget. While there may be some argument for keeping back information on matters like welfare rates, complex measures around recovery of over-payments for example could be published and debated in advance. The Social Welfare Bill is effectively a vehicle for introducing substantial amendments to the social welfare code which are not going to be debated within the time allocated," said FLAC Director General Noeline Blackwell.

Both groups condemned a measure in the Bill doubling the length of time that people have to wait to apply for illness and injury benefit from three to six days. This is something that the groups say will impact most heavily on the poorest working people.

"People are being required to keep a week's salary in reserve. We in NCLMC and FLAC know that many find it hard to manage week to week and just do not have such reserves," commented Moya De Paor, Solicitor with Northside Community Law & Mediation Centre. "This will really hit people at the lower end of the job market who have no sick pay scheme or other safety net."

FLAC was extremely disappointed at the changes on Mortgage Interest Supplement. "This payment to struggling households in arrears is a crucial housing support which has been whittled away over the past years. It is now to be taken away completely although government cannot be confident that lenders have the best interest at heart of keeping borrowers in their family homes," said Noeline Blackwell.

The joint submission also highlights the discrimination suffered by young people under 26 in the Bill and the fact that would qualify as unlawful discrimination if there wasn't provision in law for specific discrimination based on statute.

In a complex new set of proposals stretching over pages of legislation, the Minister for Social Protection apparently proposes to recoup from insurers any benefit paid out to a person who makes a personal injury claim. The two bodies are concerned about several aspects of the mechanism, including the fact that for the first time, it restricts the right of appeal for a Social Welfare recipient.