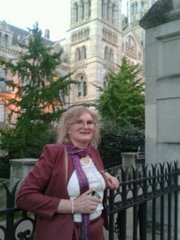 Lydia Foy (L) in London as a shortlisted nominee for "Campaigner of the Year", part of the European Diversity Awards 2013.

On Wednesday and Thursday this week the Joint Oireachtas Committee on Education and Social Protection will consider the general scheme or outline of a Bill to recognise transgender identity published by the Minister for Social Protection Joan Burton in July 2013.

While welcoming the overall scheme, FLAC says that there are deficiencies that will detract from transgender rights if the provisions remain in their present format. Speaking ahead of FLAC's appearance before the Committee on Thursday morning, the organisation's Director General Noeline Blackwell said "FLAC welcomes the discussion now taking place in the Oireachtas to allow for transgender recognition. But the proposed law could be much better and FLAC will be focusing in its presentation on ways to achieve that."

FLAC has four major concerns with the scheme for legislation:

"FLAC is concerned that this legislation will not be as good as it could be if it goes ahead in its current format. Having waited this long, it would be a shame if the legislation that comes through does not properly recognise the rights of transgendered people. We would like the Bill to be as inclusive as possible when it is published. This will help to counterbalance the indignity and suffering forced on transgender persons in the past, and hopefully will make it compliant with human rights law.

Our client, Lydia Foy, has battled since 1993 to have her human right to gender recognition respected in Ireland. She is still waiting for a birth cert in her true gender, contrary to Ireland's human rights commitments," said Ms Blackwell.

"We hope that the Committee will listen well to the voices of the Transgender community and those who support them. As FLAC Senior Solicitor Michael Farrell commented in July, it would in FLAC's view be an enormous pity and a very regrettable, continued waste of time for the state to now propose a transgender recognition law that lacks compassion and excludes any Trans person," she concluded.

- Bill on Legal Recognition of Gender in Ireland (Katherine Zappone)

FLAC: Additional Note on Compulsory Divorce:
The enactment of Gender Recognition legislation has been apparently delayed by concerns that legal recognition to transgender persons who had married in their previously recorded gender would amount to accepting same-sex marriage. This appears to be why the current scheme requires divorce as a precondition for legal recognition.

This is a harsh view, lacking in sympathy and understanding for people involved in such situations and quite disproportionate in its likely effect. Given the Constitutional requirements for divorce, it would require a loving couple who wish to remain together, to live apart for four years and to perjure themselves and mislead the courts by claiming that there is no reasonable prospect of reconciliation between them. Few relationships would be likely to survive such conditions.

Such a requirement would appear to be unconstitutional and likely to cause considerable suffering and distress and in any event, it is quite unnecessary. The already considerable support for same-sex marriage is unlikely to be materially affected one way or the other by recognising married transgender persons.

Two other EU countries, Austria and Germany, had similar 'compulsory divorce' provisions in their Gender Recognition legislation. Neither country allows same-sex marriage and the same argument about not encouraging it was made to support their 'compulsory divorce' provisions. However, the Constitutional Courts of both Austria and Germany struck down this requirement in 2006 and 2008 respectively. The German Court "concluded that Section 8(1) (2) [of the Transsexual Law] limited unacceptably the ability of a married transsexual person to fully enjoy the constitutional right to realise his or her self-determined sexual identity" (International Commission of Jurists: Sexual Orientation, Gender Identity and Justice: A Comparative Law Casebook, Geneva, 2012. 1 BvL 10/05, Federal Court of Germany 27 May 2008, pp185-6.

Neither government sought to reinstate the compulsory divorce requirement after they were struck down and a small number of transgender persons have remained married and live with their spouses without any adverse effects to German or Austrian society. A further case against Finland on the same topic is currently before the European Court of Human Right