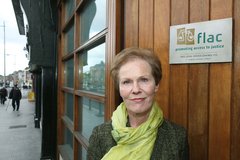 Legal rights group FLAC (Free Legal Advice Centres) warns that the context for the steady increase in mortgage arrears is one where borrowers in trouble still lack any sufficient structures to support them in dealing with their serious debts. Further, the government, despite promises to the contrary, seems to have ceded to pressure from the banking sector in setting the power balance between lenders and borrowers.

The independent organisation says that the Quarter 1 2013 mortgage arrears figures show a “relentless and consistent rise in households in mortgage arrears”. FLAC Director General Noeline Blackwell commented that “As a society, we risk becoming inured to the fact that today's figures show that 1 in every 8 private houses with a mortgage is in trouble with arrears of 3 months or more on their accounts.  In fact, we may not even notice a very serious problem revealed by the 12% growth quarter-on-quarter of private home mortgages that are carrying deep arrears of 2 years (720 days) or more.”

FLAC says a number of very worrying developments were exacerbating the position of people in arrears:

So while the arrears figures appear less dramatic, the grim context for debtors struggling to deal with their arrears makes them of grave concern, with things tougher than ever for borrowers.

And FLAC would argue that this rise is inexorable but not inevitable. According to Ms Blackwell, “At least part of the blame must lie with our legislators, policy makers and government.  Our banks are permitted to deal with each debt on a case by case basis, allowing them to entirely control the timing of negotiations and to control what restructuring solutions they propose.

“The Central Bank is requiring a number of the banks to make offers to borrowers, but where is the quality control on these offers? They are not necessarily decent offers that will keep people in their homes. As it stands, over 95,000 households are living with the awful misery of fearing for the roof over their heads. What are we as a society, if this is not a matter for serious debate and an integrated, urgent policy response?”