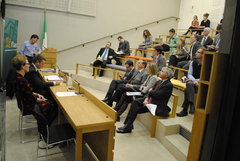 Ahead of the Bill's introduction to the Seanad on Wednesday, legal rights group FLAC (Free Legal Advice Centres) is today presenting its assessment of the Personal Insolvency Bill 2012 in the context of the government's overall action plan on debt to Oireachtas members and staff. The organisation is hoping that some changes can be made to make the new law more effective for consumers, even at this late stage.

"Following a hasty Dáil debate, the Bill comes before the Seanad tomorrow with several flaws intact. First, there is the creditor veto - despite outcry from many quarters, lenders still have the final say on any debt management proposals from consumers, with no independent arbiter to assess whether those proposals are reasonable or not. Second, there is the overly complex process that the Bill offers to insolvent consumers. Thirdly, there are no guidelines on what minimum income people will be allowed to retain to live in dignity," said FLAC Senior Policy Researcher Paul Joyce.

"The planned insolvency legislation is one of four strands of action promised by government in its Action Plan on mortgage debt," continued Mr Joyce. "But our assessment is that each strand contains weaknesses and that the overall action plan is incomplete."

"As 2012 draws to a close, we still do not know which lender is offering what form of long-term forbearance on mortgage debt to borrowers in arrears, but we do know that the financial advice that will be available to consider these proposals will be limited. According to reports, there has only been one successful mortgage-to-rent case since that scheme was formally announced in June 2012, and although the Personal Insolvency Bill will soon be enacted, it will depend largely upon creditor approval of debtor plans to be effective," said Mr Joyce.
In its presentation, FLAC is suggesting specific amendments to the proposed law and flags the fact that the other strands of the action plan are not keeping pace with the speed of the bill's progress through the Oireachtas.

FLAC's suggestions include a revised interpretation of insolvency, ways to simplify the Bill's unwieldy insolvency mechanisms, and more advice for over-indebted consumers through better resourcing of MABS and of the Legal Aid Board. In addition, non-mortgage debt also needs to be better recognised in the government's overall approach to over-indebtedness.

"The Central Bank's Code of Conduct on Mortgage Arrears has focused too much attention on mortgage debt when many consumers in fact have multiple debt to unsecured creditors. This needs to be urgently addressed with a Code of Conduct on All Debt to help people avoid insolvency," concluded Mr Joyce.

Editors' notes:
1. FLAC (Free Legal Advice Centres) is a human rights organisation which exists to promote equal justice for all. FLAC is an NGO that relies on a combination of statutory funding, contributions from the legal professions and donations from individuals and grant-making foundations to support its work. FLAC offers basic legal information through its telephone information line and free legal advice through its network of 80 volunteer evening advice centres. It also campaigns on a range of issues including personal debt, fairness in social welfare law, public interest law and civil legal aid.
2. The presentation will take place in the AV room at Leinster House at 3pm today (20 Nov 2012).
3. FLAC's recent releases on personal debt law reform are available online (including comments on the government's information initiative around mortgage debt and reaction to the ECB's Opinion on personal insolvency measures.)
4. FLAC will have an updated submission on the Bill available at the presentation and on the FLAC website. Previous submissions from FLAC on the PI Bill are also available online.
5. Some background information:
- FLAC has prepared a briefing note on the background to the reform of personal debt and insolvency laws in Ireland.
- Some other resources on the issue of personal debt are available online.
- You can see more also at our conference microsite on Legislating for personal insolvency in Ireland: International developments and domestic issues (April 2012)
- The government Action Plan on (Mortgage) Debt has four strands:
o Department of Social Protection's Mortgage Arrears Information and Advice Service for debtors,
o The Central Bank's Mortgage Arrears Resolution Strategy (MARS) on long-term forbearance measures,
o Personal insolvency legislation sponsored by the Department of Justice, and
o Department of Environment's mortgage-to-rent scheme.